Future’s too bright for Stars 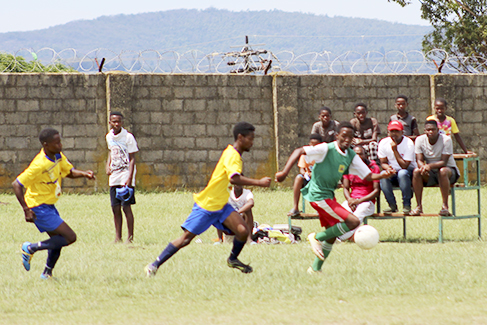 On Saturday 17 February, Eleven Attackers were at home against Friendly City from Alicedale in the SAB regional league. The slightly wet conditions of the day would prove to be a challenge for both teams to overcome.

The visitors took the game to the home side from the first whistle and tried to use the speed of their wingers. Attackers did well to absorb the pressure and tried to string some passes together to try and open the stubborn City’s defence. Most of the action was in the middle of the park as both teams tried to dictate matters in the midfield. Both teams struggled to create clear cut chances. There were some rough tackles which were not properly dealt with by the officials. One of the Attackers players was punched in the face but the guilty player was let off with just a verbal warning from the referee. Halftime score 0-0.

The second half was no different as City kept the home side on the back foot. The visitors took the lead with only five minutes gone in the second half with the first real shot at goal. Attackers slowly fought their way back into the game and caught City on the break with Sihle Ntlanjeni leveling matters with a well taken goal that was misjudged by the keeper. The midfield battle intensified and City got a free kick wide on the right which resulted in the goal as Attackers defence was caught ball watching. Attackers threw everything at their opponents and started playing some good football and piled on the pressure. The solid City’s defence finally succumbed to pressure after they left Attackers players unmarked in a corner kick. Siviwe Madevu rose high and unchallenged to find the net with a well taken header which was welcome by a huge roar from the home crowd. Both teams pushed hard in search of a winner but it was too little too late as the referee blew the final whistle. The final score saw Attackers and City draw 2-2 in what was an exciting duel.

The action continued on Sunday, when Future Stars took on Sophia Stars in the Makana LFA premier league game. Future stars made their intentions very clear from the first minute and hit the post straight from the kick off with the keeper well beaten. It was no surprise when Ayabonga Twani bulldozed through the midfield past Sophia defence to score the opener in the seventh minute. Sophia struggled to put their feet on the ball and two minutes later conceeded a second goal after a perfect run from Simamkele Dike who left the Sophia defence for dead to slot the ball home. Sophia seemed unable to deal with the pace of Simamkele Dike who once again ran through them to score the third goal. Sophia started putting some passes together and slowly came back into the game and pulled one back via the boot of Silibonile Mancam. The score at halftime read 3-1 in favour of Future.

In the second half, Future started where they left off and used their pace to break Sophia’s defence. Sophia were not going down that easily as they tried to fight their way back into the game but were let down by poor finishing. Simamkele Dike proved to be the thorn on the flesh of Sophia as he went on a powerful solo run on the left wing to complete his hattrick and Future’s fourth with a well taken goal. Sophia kept on fighting and reduced the deficit through the boot of Siphosakhe Msipha. Poor finishing and poor decision making in the final third of the field proved to be Sophia’s downfall in this game. A man of the match performance by Simamkele Dike was key to Future’s victory in this game.

Both the Makana LFA and SAB regional league will continue over the next weeks, with each team looking for those vital wins that will keep them in line for top honours.