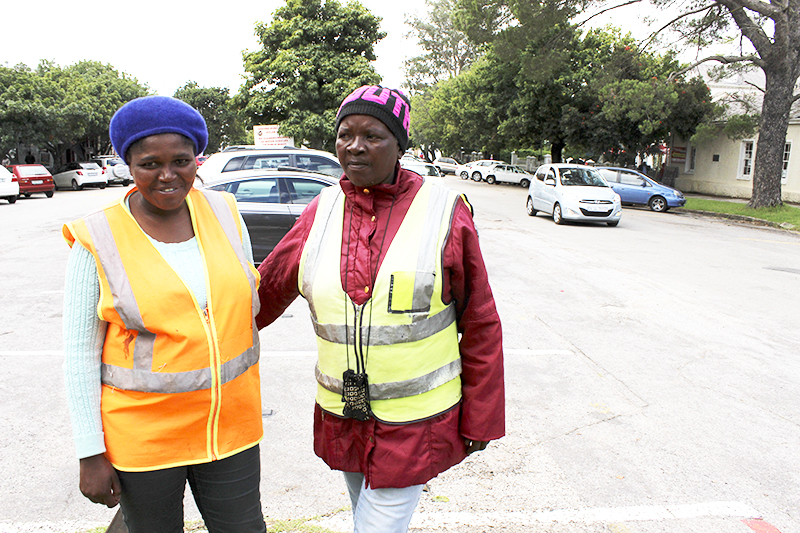 Criminals in Grahamstown are using car-guarding as a cover according to acting director of public safety and community services, Coenraad Hanekom – an assessment supported by recent reports on social media. Hanekom presented a report on car-guarding in Grahamstown to the Social Development Portfolio Committee at its meeting in the City Hall on Wednesday.

According to Hanekom’s report, fake car guards are openly selling drugs at certain venues; women are aggressively targeted for tips and vehicles are deliberately damaged.

Since pavement parking meters were phased out in Grahamstown in 2002, two attempts to systematise parking in the CBD had been attempted, Hanekom wrote. In 2002/2203 and 2016/17 companies used hand-held devices operated by parking marshals. The second company’s contract had been cancelled by Makana in April 2017 “due to various problems”.

Last week, the Chief Traffic Officer reported back on research he had undertaken in other centres to try and come up with a workable system for Grahamstown.

“Car-guarding is often unregulated, but some towns have tried to introduce some regulation through a vetting process,” Hanekom said. Vetting and oversight was carried out by the police, or private security companies, in conjunction with traffic departments.

“But these are loose arrangements,” Hanekom said, because if there’s a problem down the line, someone must take responsibility.”

He said there discussions with the Local Economic Directorate had begun about formalising the industry to some extent. The police in Grahamstown would be happy to do the vetting, Hanekom reported, and businesses would contribute to buying special equipment such as bibs. There was also pressure from the Private Security Regulatory Authority (PSIRA) to formalise the industry.

“The problem is our guards come from the poorest of the community,” Hanekom said. “They can’t afford to pay for registration or training.”

The meeting raised concern about liability both to the public, and to the car guards and Councillor Brian Fargher said legal advice must be sought.

11 February, a resident reported on social media being violently threatened by a car guard outside Checkers in High Street. The woman claimed she was sworn at before the ‘car guard’ drew a knife, threatening her and a student accompanying her. Concerned and angry citizens soon flooded the post with comments. Harassment by street persons is an ongoing issue in the Grahamstown CBD, affecting all members of the community including local businesses.

This issue was not salient with all car guards, however. Some residents said they had never experienced any form of harassment or violence, but rather the car guards were often polite.

Comments on the post suggested that these “thugs” be immediately reported to SAPS, and that official ‘car guards’ be mandated to wear name tags. Certain businesses such as The Rat and Parrot, have regulated car guards they have known for several years, which helps eliminate aggression and harassment.

A citizen pointed out that security guards are required by law to register with the Private Security Industry Regulatory Authority (PSiRA) , and that car guards should have similar protocol.

With the recent installation of 24-hour CCTV cameras in upper New Street by Makana Revive, greater security measures, have yet to be implemented in central and lower New and High Streets.