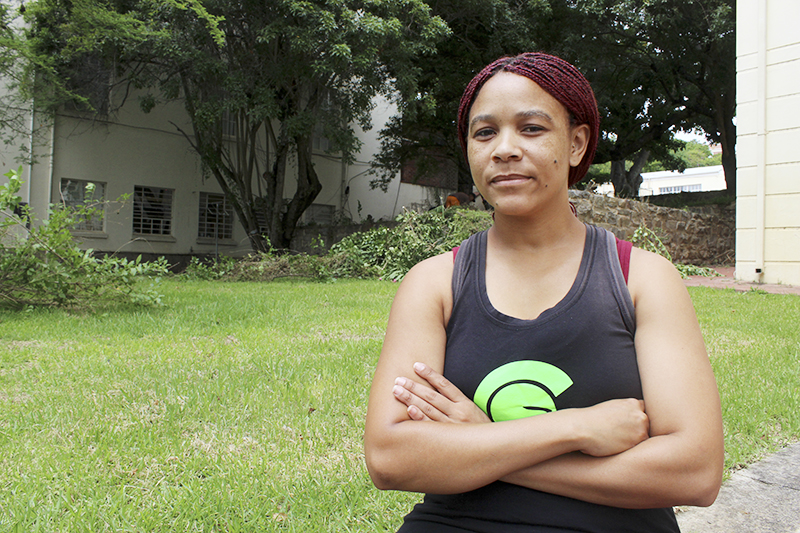 Michaelone Vaaltyn is terrified after 'Ninja' burglars raided her home while she was sleeping. Photo: Sue Maclennan

“I want to be the last person this happens to,” was Rhodes PhD student Michaelone Vaaltyn’s reaction to being robbed while she was asleep in her bed.

Vaaltyn, who shares a relative’s house in Extension 10, woke up last Sunday morning to find the door open, and the cellphone she slept with under her pillow missing, along with her tablet, her cousin’s cellphone, a watch, several pairs of shoes and her purse with all her bank, ID and access cards.

She’s terrified that the silent ‘Ninja’ burglars will return and wants to warn other residents to be extra careful. She also urges the community not to buy stolen goods.

There were signs something was going to happen, Vaaltyn told Grocott’s Mail.

“Last week, my cousin kept saying she was noticing shadows outside the window. Then on Thursday, I woke up around 2 in the morning when some bricks stacked under my window fell over.”

Vaaltyn, a biochemist doing cancer research, spent last Saturday working on campus and returned home around 10pm. She finally got to bed around midnight. She reads academic texts before she goes to sleep and uses her phone to Google-search for terms she doesn’t yet know.

“I read a page and a half, then put my phone under the pillow and went to sleep,” Vaaltyn said.

The next morning she woke in a panic, realising it was already 8.45am.

That’s when she looked for her phone and realised it was missing. And then the pieces started to fit together – the front door and her son’s cupboard door open, a jug on the floor. Her cousin, still asleep in the other room, was just as puzzled when she woke her – and then the shock set in.

“That’s when we realised we we’d been broken into,” Vaaltyn said.

Frustration followed as she reported the burglary at the police station – only to be told the officer couldn’t come immediately because all staff were required at a fight going on in Extension 9.

“To be fair, the constable was sincerely trying to help and she did apologise,” Vaaltyn said. But she was committed to an important experiment in the laboratory and couldn’t wait at home for an officer.

“I couldn’t put the experiment on hold, so it was only the next day when I could be there at a time when the officer came. I was very frustrated because by that time the evidence would obviously be contaminated,” said the scientist, who feels she could have received better attention from the police.

Vaaltyn has questions, too, about the thieves’ modus operandi.

“I am a very light sleeper and it’s unusual I wouldn’t wake up,” she said. “And to think they even took my phone from under the pillow I was lying on. What did they use to make me stay in such a deep sleep? Did they burn something?

“”What if I’d woken up while they were in the house? What else might they have done to us while we were sleeping?” she asked. “How do they do this – like invisible ninjas?”

She also has a warning and a plea.

“Make sure your house is secure,” Vaaltyn said. Make sure you’ve got burglar guards, and a bolt for your door.”

She believes the thieves pushed a thin piece of metal alongside the door frame to force open the latch.

“I would like to ask the community, please don’t buy stolen goods,” Vaaltyn said. “Often you are supporting drug addicts to continue their habits, because they are often the ones doing this kind of theft.

“And just think – what if it was you or your children who had your home broken into?”

“As an unemployed student working hard to make ends meet, all those things that was taken I’ve worked hard to get and for most of it I am still paying accounts.”

In her purse was her 2018 student card, her ID book, bank and account cards, along with two ID size photos of her son.

“It would save me a lot of trouble if I can get my purse if not all my belongings back.”

She urged Grahamstown residents to stand together as a community and put a stop to crime in the town. In a Facebook post she wrote, “Crime in Grahamstown is becoming so popular these days that people think it is normal.

She also said, “Our police should also assist and give proper services, so we can feel saver in our homes… but I am happy to still be alive to tell the tale and hopefully alert everyone else and prevent it from happening again.”

No reply had been received to our request for comment from the SAPS  by the time of going to press.

IF ANYONE TRIES TO SELL YOU THE FOLLOWING…