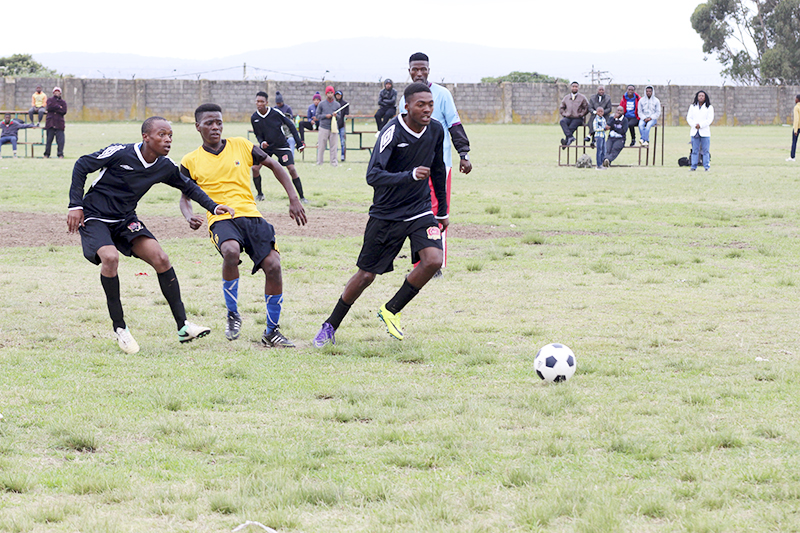 On Saturday all our 3 local teams were in action in their SAB regional league fixtures. In the first game Sakhulutsha defeated United Eleven from Bathurst by 2 goals to one, with Lindokuhle Mdoko scoring a brace. The second game saw two times New year’s cup champions Maru taking on Eleven Attackers in the local derby. The game started with both teams still weighing each other’s strength. It was always going to be a battle of midfield as both teams have very good and skilful midfielders who are comfortable on the ball. Both started going at each other at high pace and Attackers nearly oppened the scoring when a well taken free kick was pushed over the crossbar by Maru goalkeeper. Playing with the wind on their faces Maru did very well to absorb the pressure and also had chances of their own to score. The game was very tense and competitive with emotions as well. Hard and dangerous tackles flew all over the field. Both teams played very good and entertaining football but failed to make it count. Haltime score 0-0.

In the second half Maru started dominating the midfield with some neat passes and took the game to Attackers. With only six minutes into the second half Maru received a free kick on the right side of the field which was played to the far post and met their captain who unselfishly played it across the face of goal and was scrambled home by Libona Nondlwana for the game’s opener. Attackers made some changes and started pushing more bodies foward in search of an equaliser and were caught by a quick counter attack and a good cross from the right wing was tapped in by the ever alert Liyabona Nondlwana. Attackers struggled to contain the Maru midfield and afforded them too much space on the ball which proved to be very suicidal as they conceeded an own goal after one of their midfielders headed the ball past an advancing keeper into an open net to give Maru a 3-0 lead. Maru just kept on pilling the pressure on their opponents and ran rings around their defence and also had time to grab a fourth one through the boot of their substitute Masixole Adonis who fired a rocket from the distance and gave the keeper no chance at all. Both teams gave the football lovers a great game with all ingredients of a good derby.

Both teams enjoy hard running football and it was no surprise to see them going at each other from the first whistle. Pirates had the first opportunity to open the scoring but the striker shot wide.

Love & Peace created chances of their own as well.

On the 13th minute of the game Pirates beat an offside trap and the keeper left his goal posts to intercept the through pass but unfortunately his clearance bounced off an onrushing striker and was finished off by Thabo Rafa who just pushed the ball into an open net.

This seemed to spur Love & Peace as they started playing some good football keeping their opponents’s defence on their toes and soon equalised with a thunderous shot after some neat passing on the left side, Siyamtanda Mkaliphi caught the keeper off his line and left him for dead as the ball flew into the roof of the net to level the score. It was pound for pound as both teams threw everything at each other but failed to capitilise on the chances created. Halftime score 1-1.

In the second half both teams started where they left off and Love & Peace grabbed the lead via a long range free kick scored by Olwethu Dyibishe after poor handling by the Pirates keeper.

Pirates threw attack after attack searching for an equaliser and got finally got one through the boot of Sinathi Kom. The game became more open as both teams were pushing for the winner. Love & Peace had about three good chances to clinch the game but failed to convert them and were made to regret those misses when Athenkosi Mnyamane headed home the winner in the dying minutes of the game to win it for Pirates.

Despite being on the losing side Love & Peace keeper Saun Botha played a game of his life and this boy has been very consistant in his performances and deserves to play in the regional league. He came up with many brilliant saves in this game and deserves to be the man of the match.