Your Town, Our Town

Your Town, Our Town media exchange 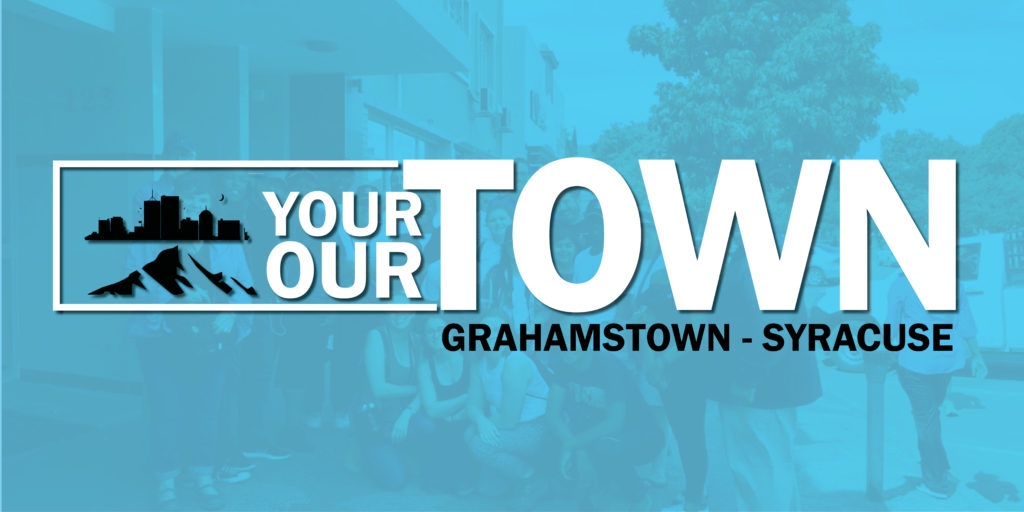 In last week’s edition, Grocott’s Mail reported on an exciting community partnership between Syracuse, New York and Grahamstown in the article “US town, Grahamstown in storytelling project”. Today marks the start of this (hopefully) engaging and enlightening project. After conversing with members of the Syracuse and Grahamstown communities, it has become clear that these two towns have many similarities. Both consist of a rich university high up on a hill that overlooks an impoverished community. Both communities suffer from inequality, poor service delivery, as well as educational and digital divides. With that, Grocott’s Mail has partnered with an inner-city community newspaper in Syracuse, The Stand, to partake in a weekly media exchange that will work to unify, educate and enlighten both communities by sharing stories. Each week Grocott’s Mail will feature a story submitted to us by The Stand and vice versa. We will explore themes such as expression, education and community building. It is our hope that our reader’s will enjoy the content and gain valuable insight into another part of the world. For more information about the Your Town, Our Town media exchange, please Whatsapp Grocott’s Mail at 076 733 1770 or message us on our Facebook page, Grocott’s Mail.

Hopefully lessons from ‘one of those places’

I just got home from a s—hole earlier this month. At least that’s what we’re told it was.

Funny, I came home thinking “what a nice place.” Indeed, one of the people traveling with me commented, “I could live here.”

No, it’s not Haiti. Not that s—hole. I just spent two weeks in Grahamstown, South Africa, working in that one. I know, it is so hard to keep them straight!

Professor Ken Harper and I led eight students from the S.I. Newhouse School of Public Communications at Syracuse University on the trip. When we left, it was an adventure in working on our storytelling skills and immersing in a different culture. We had a great time. Learned what we set out to. Met some sweet people. Hated to come home.

Indeed, it was only when we got back that we realized what a mess the place was in and how fortunate we’d be if the folks there never paid us a return visit back, much less immigrated. (By the way, this might make some of you nervous, but almost to a person they said they certainly wanted to visit, being that Americans seemed so nice.)

The theory is, if you actually visit a place and get to know the people, then you can’t be fooled by them. Then something like this presidential kerfuffle happens and it just won’t go away, and the truth gets out and you can’t help but feel a bit embarrassed. Except the truth isn’t about them, it’s about us.

I have taken a few of these class trips, and I have a saying about what we have consistently learned: No matter where we travel, or how far we travel (8,300 miles this time), we find out that as people on this planet, we are more alike than different.

There are some differences, though, and the lesson’s actually this: Sometimes those differences are right here at home, and they can be some pretty ugly ones.

None of these perceptions that have been voiced about “those places” found fact in Grahamstown, where we spent most of the time in the township just outside the city. People welcomed us into their homes, their businesses and their churches. One rapper worked my name (“Big Steve”) into a song he freelanced. Pastor Lizo Welcome embraced our obtrusive equipment as part of his Sunday service, and then after his sermon had ended taped a short, personal video saying “Happy New Year” to my congregation back home. A band of whirling, peanut-sized children gathered just for our cameras to show us their dance routine. We were spent after watching them spin for more than 30 minutes in 96-degree heat. They were not. When we visited a couple of young musicians who taught township kids how to play marimbas, the pair coached us up, too, right there in the front yard. (That’s where they teach; their tiny home is not big enough to accommodate the instruments when they are unfolded and set up.) Just another outdoor music lesson on another searing 90-degree day in a treeless yard. What’s to complain about?

One of our guides during our stay hosted some high-schoolers who accompanied us for a traditional dinner. He had it next door, though, because his own home wasn’t big enough to accommodate everyone. He did show off his own newly built house to us, a one-room structure of mud and metal divided in half by a hanging blanket, put up by him and his girlfriend in just six days. No running water. No toilet. No electricity. But home sweet home to our host, who said he’d grown tired of waiting for a promised government-subsidized structure. What would we call that? American ingenuity?

Apartheid officially ended in South Africa in 1994 (just like racism is said to have ended here, I suppose). But the townships that persist outside cities all over the country, those special areas reserved for nonwhites, are testament to the reality of segregation and inequality that continues to drive politics and often split people apart. If you think too much about it — or really at all — you experience more uneasy reminders of home. Like I said, we’re more alike than different, for good and bad.

I first visited Grahamstown in 2010, and ever since then I’d plotted how to get back. This year I was so pleased to make it. And the more I think about it, I realize that just like one of my fellow travelers (it was Professor Harper), I could see myself living there, too.

Can you think of anything nicer to say about a place? Here is hoping  South Africans will continue to think the same about us, too, and that some will realize their dream to do it.

(Steve Davis is an associate professor at the Newhouse School and for more than 10 years was chair of the Department of Newspaper & Online Journalism. In the 1980s, he ran the Washington-World news desk at USA TODAY. Harper runs the Newhouse Center for Global Engagement.)

This article was originally published in The Post-Standard on 4 February, 2018.

Are you a ward champion? We need you.

Makhanda, what’s going on? And what is going wrong?