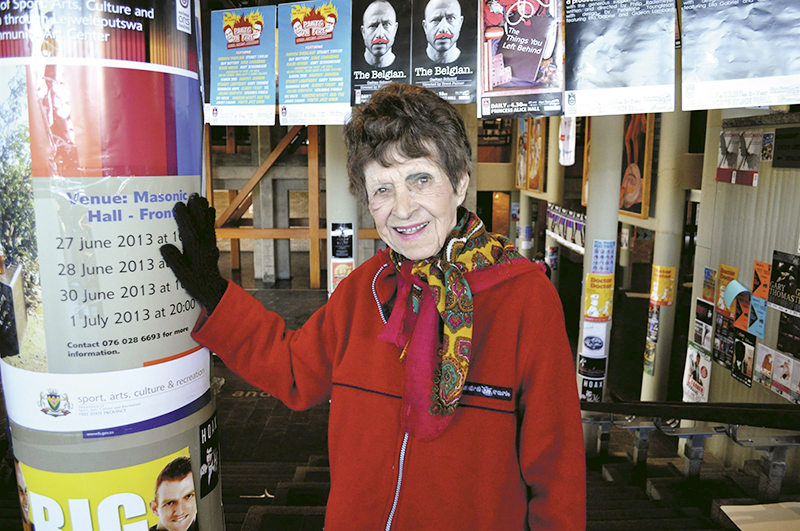 The funeral service of journalist and activist Thelma Neville will be held in the Cathedral at 11am on Saturday 17 March. Neville, who celebrated her 100th birthday in style in Grahamstown two years ago, passed away in her sleep on Sunday night. She leaves her brother Vaughan Thorndike.

Close friend Nickie Turner said there would not be a committal, as Neville wanted to be cremated.

“Her ashes will be interred next to her husband Geoff (whom she absolutely adored) at a private ceremony in March when her nephew and his wife can get here from Italy,” Turner said.

“Thelma was no slouch. She discussed her plans for her funeral service with Reverend Claire Hunter while she was at Brookshaw so we all know what we are doing!”

At her 100th birthday in July 2016 – a lively affair at the Monument which Neville also planned from start to finish – she told the gathering of friends and relatives who came from across the country and around the world, “My biggest blessing is that I live in Grahamstown.”

Her contributions to the City included being the first Woman President of the Eastern Areas Development Association, a founding member of Brookshaw home, a member of the City Councillors’ Committee, Chairperson of the Grahamstown Ratepayers’ Association of which is she is also an honorary life member and she worked with the Zenzile Association to assist women starting businesses in the township.

We publish below Turner’s tribute to Thelma Neville, which she delivered at her 100th birthday party in July 2016.

A woman born before her time: a tribute to Thelma Neville

Thelma attended Wynberg Girls’ High School and matriculated when she was 17. She worked for a year at the office of the Argus newspaper in Cape Town in order to fund her tertiary studies – and so the journalist was born.

She read for a Bachelor of Arts degree majoring in English and history.

Thelma met and married Geoff Neville. They moved to Grahamstown when Thelma was 36. Geoff was the manager of Barclays Bank and a member of the Rhodes Council. And so began a life-long relationship between Thelma Neville and Rhodes University, culminating in the writing, together with her great friend Richard Buckland, of the book A Story of Rhodes which was published by Macmillan in 2004.

Thelma was to make extensive use of articles that she had written as a journalist based in the Eastern Cape in the compilation of the book.

This was not the first book written by Thelma. She documented the building of the 1820 Settlers’ Monument in her book More Lasting than Bronze. Thelma was instrumental in the fund-raising for the building.

Professor Guy Butler knew her talents and appointed her to this position. She used her journalistic talent, interviewing famous people in South Africa and abroad, to generate interest in the idea, and wooed the likes of Harry Openheimer to provide generous financial backing. It was, to coin a phrase, a monumental task to sell a monument that was not even built yet. It took 20 years from inception to fruition, culminating in another beautiful parallel in Thelma’s life.

The Monument was officially opened on 13 July 1974, a week before her 58th birthday. Thelma recalls that there was a special interdenominational service after the opening at which Archbishop Bill Burnett officiated. He said that the Monument had been built for all that was good; for the healing of a nation.

She has always been a woman born well before her time. Her life and interests have been shaped by the fact that she has lived through, engaged in, and experienced the modern history of South Africa. She has seen the country evolve from the Union of South Africa into the Republic of South Africa, with the coming to power of the Nationalist Party and the implementation of apartheid. She has seen the political order change again with the abolition of apartheid and the coming to power of the ANC. Endowed as Thelma is with a remarkable recollection augmented by a photographic memory, she is much like a walking, talking encyclopaedia of South African history with the added benefit of an infectious sense of humour.

She still has an active interest in politics born out of her years as a journalist. She was the Grahamstown representative for the Daily Dispatch, of which Mike Loewe is now editor, and the Sunday Times. She wrote for all the major newspapers in South Africa, both English and Afrikaans. Her articles were also published as far afield as London and Edinburgh. She was the regional representative for SABC Regional news for 40 years and covered every election until 1994.

The UN declared 1975 the International Year of the Woman and the decade that followed, commencing on 1 January 1976, the International Decade for Women, designed to promote equal rights and opportunities for women around the world. It is no surprise that our Thelma, being a woman before her time, was actively involved. It was decided that Grahamstown would host, at the newly opened Monument, an International Convention of Women. Delegates, numbering 800, from across the world were invited. It was a collaborative effort at the height of apartheid resulting in a huge success despite the threats of boycotts and harassment from the security police – also known as BOSS.

The SABC also sent her to report on the International Women’s conference in Persia (as it then was known). Thelma talks with great fondness of this trip in which she was accompanied by her husband Geoff and her sister Gwen. She rubbed shoulders with famous women and found that women have an unusual talent for identifying and building on areas of commonality.

Thus she was the President of the National Council of Women which had various committees involved in social care. She was also a member of the Rhodes Women’s Association. She is an outstanding woman and in acknowledgement thereof she was invited by the Grahamstown City Council to sign the Golden Book containing the names of those who have served the City in an outstanding manner.

Her contributions to the City included being the first Woman President of the Eastern Areas Development Association, a founding member of Brookshaw home, a member of the City Councillors’ Committee, Chairperson of the Grahamstown Ratepayers’ Association of which is she is also an honorary life member and she worked with the Zenzile Association to assist women starting businesses in the township.

When Thelma retired from the Monument she certainly did not retire from work. She then became involved in promoting the Wine Festival held in the cellars of the Grand Hotel, at that time owned by Leon Reich and his wife Juliette. She did this for five years and she continued to write. A number of her short stories for children were broadcast on national radio.

Previous ArticleDrought set to be declared a national disaster
Next Article Set up to fail, but not blameless