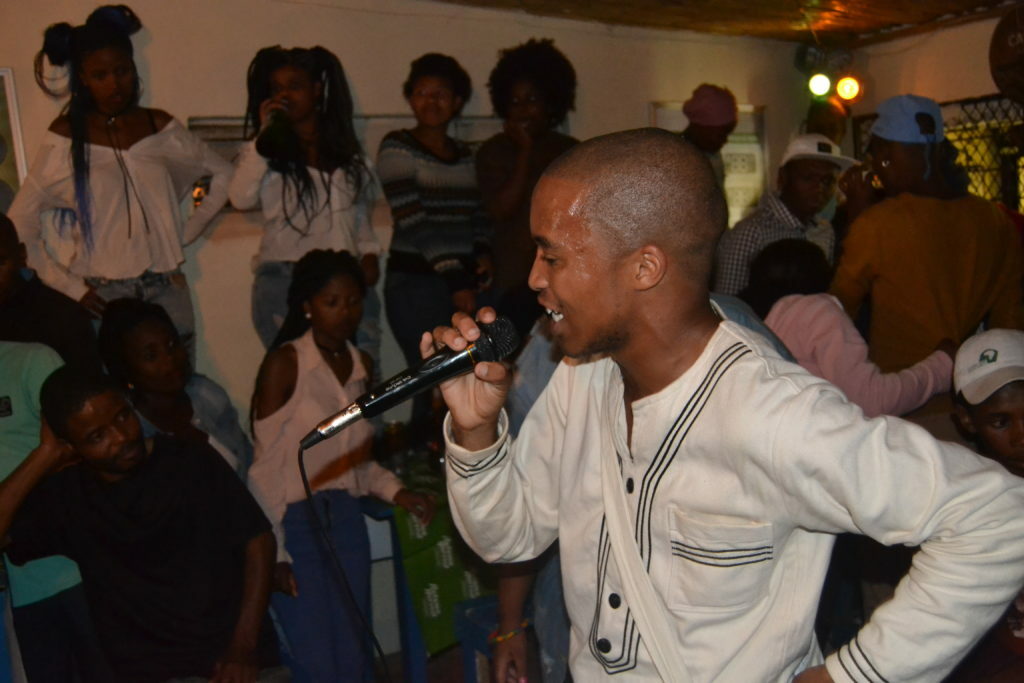 Bhodlingqaka comes from a collective of poets called Imin’ esisdenge, who have been reciting poetry in and around Eastern Cape.

He is a thought-provoking poet who left MEC Pammy Majodina in discomfort when he performed one of his political pieces during WordFest during the 2017 National Arts Festival.

Over the past few weeks, the young poet appeared on our TV screens through consistence and perseverance, as he performed on national television show, The Xpressions on SABC 1, with the help from Puku Festival who prioritised him for travel to Johannesburg.

After his TV appearances, Bhodlingqaka has become a local scenes sensation, with few being able to have inner peace when he’s performing. After his last album “Iintonga Zetyendyana” became a moderate hit, Bhodlingqaka is putting all his energies in his second–“Mandingathuli”.

He have been performing on any given platform to promote his music, from local Malls to schools in Grahamstown and surrounding areas, where he has sold over 500 CDs.

The weekend event started off a little bit late as Bhodlingqaka still facing some difficulties as he tries to avoid the mistakes that sent Zion Eyes behind bars. Apparently someone stole Bhodlingqaka’s laptop with most his upcoming album work, from his room.

Bhodingqaka is a local superstar on the come-up and he essentially shut Jabu’s Place down with his African Rhythms.

He planned the whole thing quite well, and did not feature his collective as people would have assumed but worked with Via Kasi Movers, Siyanda and Zeezee Da Rapper and this writer (Azlan Makalima). Best believe, we brought our  A-Game too.

If you missed this show, Via Kasi Movers will host a Dance Competition at BB Zondani Hall, on Saturday 24 February which will feature the entire line-up as the one at Bhodlingqaka.