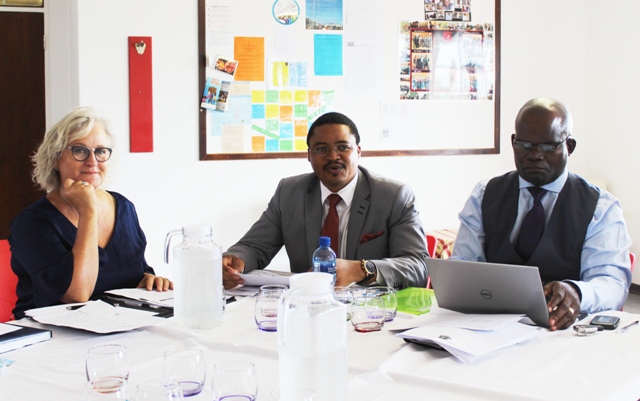 MEC for Rural Development and Agrarian Reform Mlibo Qoboshiyane addresses stakeholders at a visit to Ntsika Secondary School as part of the Province's School readiness campaign. Left is principal Madeleine Schoeman and on the right is Advocate James Mlawu, Superintendent General of Scholar Transport at the Department of Public Works, Roads and Transport. Photo: Sue Maclennan

“We cultivate a future that is in your own hands,” Mlibo Qoboshiyane told pupils at Ntsika Secondary School during their assembly Monday morning 22 January – just under a week into  the new school year.

The MEC for Rural Development and Agrarian Reform led a high-powered delegation to the school which in five years has improved from a 29% pass rate to and 85% pass in Matric 2017, and a place in the top five schools in the Sarah Baartman District. The group which included several senior officials from various provincial departments was executing the 2018 School Readiness monitoring and support campaign initiated by Education MEC Mandla Makapula.

“We do this pilgrimage every year,” Qoboshiyane told Grocott’s Mail in an interview during a break in the morning’s proceedings. “We’re here to pick up challenges that the schools face, such as teacher shortages, and handle them quickly on the spot.

“For example, there’s a teacher who wasn’t paid for four months – and someone on this team is dealing with that as we speak. Teacher vacancies have been brought to the attention of the District Circuit Manager. We cannot afford to have learners without teacher when posts are funded.”

“As Government, we’re here at Ntsika to acknowledge and appreciate their achievement, as well as to encourage learners to take education seriously. To improve steadily from 29% to an 85% pass in five years is impressive and we must give them our support.”

Qoboshiyane said the support some banks were giving schools to appoint teachers was also impressive.

It was Qoboshiyane who led the delegation that walked out of the ANC’s Eastern Cape elective conference in East London late last year. After the violent and disrupted conference, Eastern Cape Premier Phumulo Masualle challenged the legitimacy of rival Oscar Mabuyane’s election as the ANC’s provincial leader. Grocott’s Mail took the opportunity to ask how the rift had affected the functioning of provincial government.

“We are mature,” Qoboshiyane said. “Those deployed in government understand the role of the ANC. If you are appointed in Government you must fulfil your mandate.

He said a delegation from the party’s National Executive Committee had visited the province and they awaited the outcome of that intervention.

“There is no reason to frown on anyone,” he said. “We still need each other no matter what the outcome. We need a province united not only in action, but also by vision.”

“We have a fully functional SGB,” Zani said. “Our parents are involved in the school and we have transformed the school’s culture to one where everyone takes responsibility for themselves. Everyone knows they have a part to play for the good of all.”

In the next leg of the School Readiness campaign, the provincial portfolio committee on Education is due to visit schools in the Grahamstown Circuit Management Centre (CMC). On Thursday they will visit Port Alfred High and Primary schools, as well as Alexandria High and Primary. On Friday Nathaniel Nyaluza and Khutliso Daniels Secondary Schools and DD Siwisa and CM Vellem Primary Schools will receive visits from the Portfolio Committee accompanied by Grahamstown CMC head Raymond Ndabeni and other education department officials.