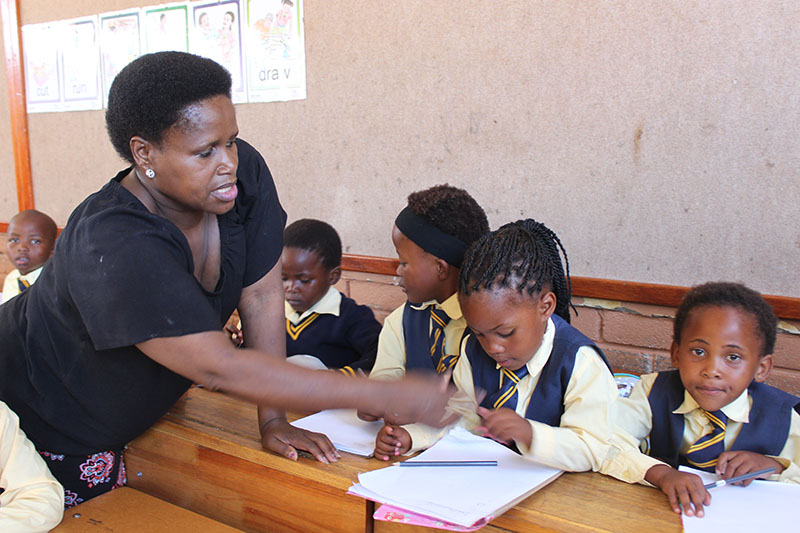 At all but one or two Grahamstown state and public schools were ready for action on day one of the new school year on Wednesday. At the no-fee schools, where the Department of Education supplies stationery, workbooks and textbooks, these were in place and ready to use. Some schools needed a top-up of textbooks because of bigger numbers than anticipated in certain grades.

Grocott’s Mail visited schools across the city – and in Joza found ward councillors and education department officials on the same trail.

A frustrated Samuel Ntlebi principal Dumakazi Myemane was attending to parents making late applications. The school’s Grade 7 class had ballooned from 26 to 51, so they needed a top-up of stationery and workbooks, but otherwise everything was in place, Myemane said. Their meal servers were appointed until the end of March and Myemane expected that to run smoothly.

They had the materials and classrooms they needed and at the end of last year they received furniture – “so we’re fine”. The school has dropped Grade 8 this year, so their 904 enrolment of last year is likely to end up at around 850.

In Joza, four primary schools serve Ward 2. The discrepancy between neighbours  Makana Primary and NV Cewu was striking: the former was in evident disarray, while across the fence, teachers at NV Cewu was the picture of order.

At Makana Primary, the principal was attending a memorial service, staff said. The meal preparers said they were cooking mphokoqo – mielie meal and sour milk – for 540 children.

One teacher was attending to parents hoping to enrol their children, as well as comforting tears and organising staff.

In the central quad children were still being lined up and sent to classrooms around 10am. One child sat alone behind the school building, apparently unnoticed.

At NV Cewu next door classes were in session and the visitors’ book showed that a member of the local ward committee had already paid the school a visit. The principal was on leave and deputy Phumeza Mqubuli answered Grocott’s Mail’s questions.

If the school looked incredibly organised, it was.

“We asked the Foundation Phase parents to come in on Monday to collect stationery and Intermediate Phase on Tuesday. So today (Wednesday) we start teaching,” Mqubuli said.

The school has two classes for each grade, from Grade R to Grade 7, giving them a total of 761 learners. They have 12 classrooms and a wendyhouse and are awaiting the Grade R classroom they’ve applied for. The Grade Rs are currently housed in a converted toilet building.

One of the three new teachers they were expecting had arrived and the school was waiting for textbook top-ups.

DD Siwisa Principal Zolani Gosani was in his Grade 4 class when Grocott’s Mail arrived. He’s there until the district office allocates another teacher.

“All of our teachers and most of our learners are present today,” Gosani said.

It was very different from the previous year, when on the first day, dozens of parents hoping to enrol their children queued outside the offices.

“We called meetings and wrote letters encouraging parents to enrol their children on time. We told them that on opening day we would be in class teaching, and not attending to parents’ queries.

He said they would have around 566 learners once all enrolments had been finalised. The school has 16 teachers.

Archie Mbolekwa Primary School principal, Lindiso Funani is confident for 2018, with all the school’s requirements delivered. But he fears the growing number of learners will leave a shortage of teachers, especially in Grade R.

Many of the parents are former learners at the school and are strong supporters.

“The Department of Education has arranged transport for learners who stay outside Grahamstown and has already allocated the funds for maintenance,” said Funani.

Funani invited anyone able to lend a helping hand to feel free to do so.

“We have kids who come from disadvantaged families, who would appreciate receiving anything offered to them. We would also love to teach happy and comfortable kids.” Funani said.

Tantyi Primary School principal Sipho Nontsu confirmed that the school had done their preparations last year, but would ask the Department to supply top-up stationery.

The school serves Xolani and surrounding areas including X, Y and Z streets and Zolani. They have one class for each grade.

Samuel Ntsiko Primary School principal Nombulelo Koliti couldn’t confirm the status of their supplies, the teacher ratio or the number of scholar transport learners, as they were still distributing stationery and allocating learners to their classes.

Koliti is concerned about the school fencing, as donkeys and cattle, roam the yard.

She is pleased that the department has deployed two teachers and that this month they also have two student teachers.