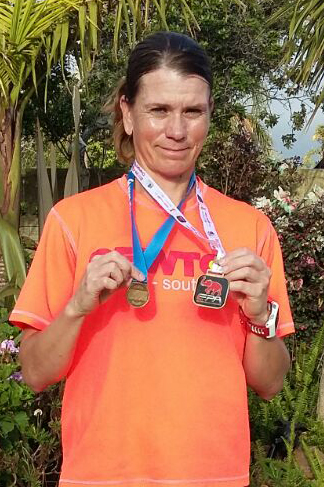 Penney is a personal trainer and bootcamp instructor, for more information please contact her at 083 504 7940.

This is Penney’s second provincial medal this year, after winning a silver medal in her category at the Pananmor 21,1km, which doubled up as the Eastern Province Championships, in May.

In September, Penney was part of the 57 member Eastern Province team which participated in the South African cross country championships in Potchefstroom where she ran in 40-45 age category.

Earlier, Penney was selected as part of the Eastern Province Athletics 21km team that participated in the Nelson Mandela Bay South African Half Marathon Championships in Port Elizabeth, which hosted the top runners from around the country, as well as a number of international runners.

With her latest podium finish, Penney hopes to be selected for the Eastern Province team to compete in the 2018 South African marathon championships. Meanwhile, she is preparing for her 11th Standard Bank Ironman 70.3 South Africa which takes place in East London at the end of January.