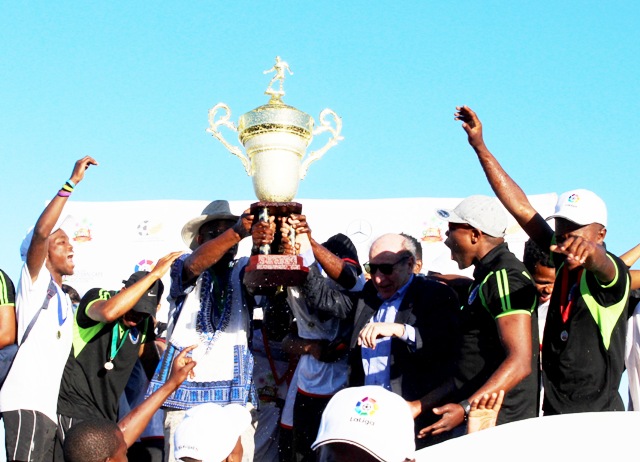 Maru holds aloft a champagne-drenched trophy as they celebrate victory after the New Year's Cup soccer tournament final at JD Dlephu Stadium Grahamstown Sunday 31 December 2017. Photo: Kathryn Cleary
By CHRIS TOTOBELA
Maru beat Young Chiefs 3-2 in a very close and entertaining encounter which had the fans on the edges of their seats in the final match of the New Year’s Cup at JD Dlephu Stadium in Grahamstown on Sunday 31 December 2017. Mzoxolo Rafane scored all three goals for Maru and it was no surprise when he was chosen as the Man of the match.
Earlier, in the battle for third place, Queenstown team Amavarara easily took bronze against local side Sophia Stars in a one-sided contest. Amavarara won 2-0, with both goals coming in the first 20 minutes of the game. Sophia Stars tried to fight back later in the game, but it was too little too late.
In the final match between Maru (Makana-Rhini United) and Young Chiefs, from Alice, both teams started the game at a very high pace, exchanging some neat passes in the midfield.
Young Chiefs had the better of the midfield battle and nearly opened the scoring when their striker collided with the Maru goal keeper after a great cross from the right wing. Maru’s goalkeeper was injured in this incident but was soon back on his feet.
Maru struggled to take control of the game and tried their best to absorb the pressure. A good defence-splitting pass found their lethal striker Mzoxolo Rafane with a lot of space. He wasted no time with his powerful shot finding the roof of the net, giving the defending champions the lead and causing JD Dlephu stadium to erupt with cheers.
Young Chiefs kept piling on  the pressure, forcing Maru to make some mistakes and it was no surprise when one of the Maru central defenders was caught napping, lost possession of the ball and was punished for it with a Young Chiefs goal bringing the game level at one-all.
Both teams started throwing everything at each other, dishing out great football and entertaining the lively crowd at a packed JD Dlephu stadium. Maru created a lot of chances and were unlucky not to take the lead before halftime.
The halftime score was 1-1.
The second half started with the home side putting their opponents under serious pressure, trying to stamp their authority, and it was no surprise when they took the lead again via the boot of Mzoxolo Rafane after a neat build-up which had the crowd on to their feet.
Young Chiefs tried to fight back and played high balls into the opposition box, putting their defence under pressure. But Maru defended well under pressure and caught Young Chiefs on the break with their defence in sixes and sevens. Mzoxolo Rafane took advantage and scored Maru’s (and his) third goal of the match.
Young Chiefs fought back again and caught Maru’s defence off-guard after a corner kick found their top striker, Makhosandile Plaatjie, unmarked. They easily headed the ball into the net, with the keeper well beaten to reduce the deficit to one goal.
The last ten minutes of the game saw the Alice-based team piling the pressure on the defending champions and it was a relief for the huge local crowd when the referee blew the final whistle.
It was a very entertaining encounter with everything that any football lover could ever wish for in the game of that magnitude. The fans enjoyed every minute of the end-to-end action.
Mzoxolo Rafane expressed his excitement after scoring a hat-trick in the final.
“This was a very difficult game, as the opponents came to us very strongly, but we knew that we would catch them on the break with our speed. I prayed before the game that I would score two goals, but the Lord blessed me with three” he said.
Maru coach Bongani Lombo said it was a difficult game.
“I am happy that we won today and managed to defend our tittle,” Lombo said. “I could see that they were coming very hard at us so I had to make some changes to try and keep them on the back foot. It was a very difficult game. Match officials nearly spoilt the game but we had to be focused on the job at hand and not worry too much about officiating.
Maru captain Ayamkela Boloti agreed that it had been a difficult game.
“We came here to fight and God was on our side, but credit must go to our opponents who also gave a good account of themselves. I would also like to thank all the people of Grahamstown who came in their numbers to support us.
Young Chiefs coach Zoyisile Xokwane said, “It was a tough game and I am disappointed that we lost. We fought with everything we had.
“The match officials were very poor on the day and could not match the same standard showcased by both teams on the field – but that is part of the game and there is nothing we can do about that.”
Young Chiefs’ top striker and goal scorer Makhosandile Plaatjie, who was part of the  national Nedbank Keyona team that played again professional outfit Supersport United, said they knew it was never going to be easy against the defending champions, but had given it their all.
“We were a bit unlucky today but I am proud of my teammates for fighting until this far in the tournament and hopefully next year we will do better,” Plaatjie said. “The vibe in this stadium is always electrifying and motivates us to push even harder. But today was not our day.”