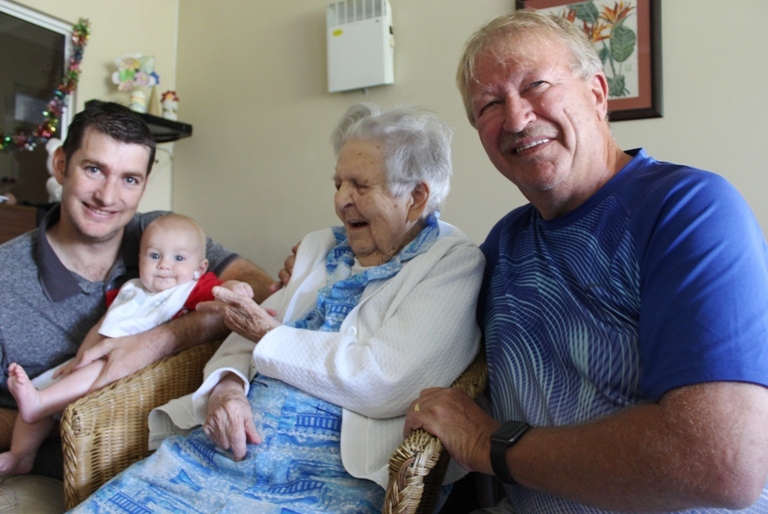 Una Levy smiles at Kyle Levey (5 months) as he remains gripping her finger after being coaxed to face the camera. Holding him is his dad Kevin, and on the right is Una’s nephew Peter Levey. Photo: Sue Maclennan

A day after she turned 100, forging her own link in the chain of a family whose extraordinary history in this town dates back before 1820, lifelong Grahamstown resident Una Maud Levey passed away early this morning.

Celebrating her birthday with her at the frail care centre at Brookshaw Home yesterday, 27 December 2017, were her nephew Peter Levey and his Tshwane family – making an unusual gathering of four generations of Leveys in one room. To mark the occasion, they brought baked treats to share with other residents of the centre.

Una was pleased to see them all, of course, but it was Peter’s grandson Kyle – five months old – who had her smiling as he gripped her finger and looked up at her from dad Kevin’s arms before being coaxed to face the camera for the photograph. That connection, and the celebration with other residents at the centre, were made all the more poignant by this morning’s news.

Una was the last Levey in the family still living in Grahamstown from a line starting with Joseph Levey, who arrived in Cape Town in 1817, 200 years ago, on the ship Brilliant. He was travelling with Benjamin Moodie’s party.

“They were independent settlers,” Peter explained. “It is not known exactly when they arrived in Grahamstown but they were there by 1821 and the family has been there ever since.”

While Una was pleased for the company on her birthday yesterday, she wasn’t able to respond to questions about her own life. Peter filled in that she’d spent her life in the family home in Spring Street.

Una was the youngest child of Dick Levey, who set the standard for endurance and consistency in the family, retiring in 1967 after working at Grocott’s Mail for 71 years.

It seems life was very much centred around the family home, with clippings from articles about Dick’s remarkable employment record on his retirement explaining that he walked every day to work from their Spring Street home (“past the Grand Hotel” Peter clarifies) and was a keen bowler at the Grahamstown Bowling Club next to Fiddlers Green. An excellent marksman, Dick was a volunteer with the First City Regiment.

A larger than life character who drove a striking black 1939 V12 Lincoln (he eventually sold it to undertaker OD Inggs), Dick Levey started work before his 10th birthday. At age 9 he would wait for the last bell at Huntley Street Grammar School before heading up Hill Street to pick up his Grocott’s Mail bundle to go out and sell on the streets.

At age 14, in 1900, he qualified for a permanent job and started work at Grocott’s as a book-keeper. In 1931 he was promoted to proof-reader and in 1945 he became advertising manager – a position he held until he retired at age 81. By the end of July 1967, when he closed the door at the top of the narrow wooden stairs at 40 High Street for the last time, he’d worked continuously at Grocott’s Mail for 71 years since he started there in 1895, only 25 years after the paper first hit the streets as a freesheet on 11 May 1870.

Born a year before the end of World War 1, Una was 22 when World War 2 broke out and her father served a period as a police reservist.

The Spring Street house – third on the right as you walk towards the station from the Fiddlers Green end – is a lot bigger than it looks from the front, with several lower-storey rooms under the house and garages on the property that slopes down to the Matyana River (Kowie ditch). That there was a lot of house to look after becomes clear when Peter explains that Dick kept his 1939 V12 Lincoln in one of two garages, and his dad used one of the basement rooms as a photographic workshop, processing film for local pharmacies.

So it’s likely Una had her hands full, maintaining order at home. However, she never had formal employment until much later, Peter said.

“Una only started working after Dick died. Then she worked in housekeeping in one of the Rhodes residences for a while.”

In her later years, Una moved to Brookshaw and the family home was sold.

Today, Peter wrote, “Aunt Una who we were with yesterday passed away this morning just after 5am. Brookshaw home called me with the news earlier. We’re pleased we were able to see her and celebrate her 100th yesterday.”