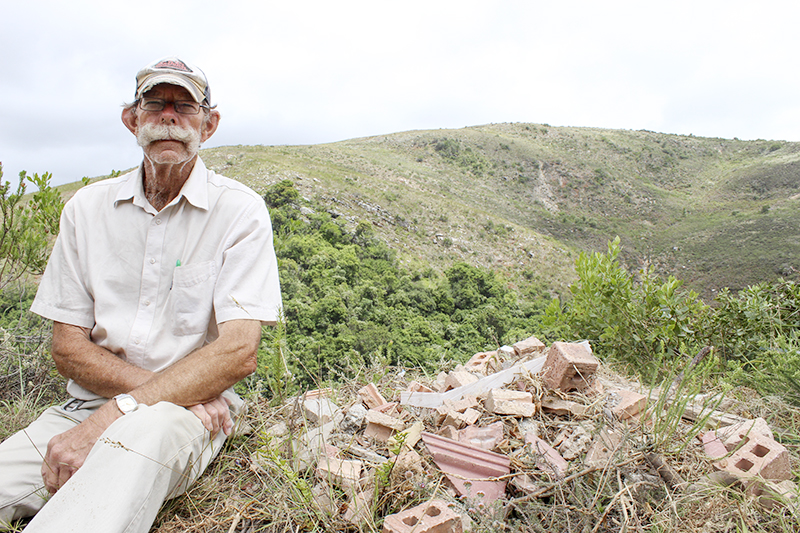 Makana Municipality has appealed to the public to assist in identifying and reporting illegal dumpers, after truckloads of builders’ rubble were found dumped in a pristine natural area outside Grahamstown last weekend.

Peter Bailey, who farms on the Southwell Road, said it ruined his weekend when he made the discovery last Thursday. Bailey drives around with buckets and a broom in the back of his bakkie, and picks up litter wherever he goes. “I can’t just leave it,” he says. “It’s such a beautiful area and I love it. I hate to see people mess it up.”

He travels the Woest Hill pass – the long, steep climb from the Southwell road to where it joins the Port Alfred road – daily and often stops to pick up bottles, cans and packets that people throw from cars.

Last Thursday he noticed some rubbish next to the road and stopped to pick it up. To his horror, he saw it was not just next to the road, but a huge load of builder’s waste had been tipped down the side of the steep gorge. A few days later, he noticed another load dumped further up the pass.

“I think they must be doing it at night,” he said. “There’s such a lot and somebody would notice if they did it during the day.”

Both sites are close to where about a year ago Port Alfred resident Gina Smith’s car left the road and she plunged to her death in the gorge a few hundred metres below. A small, simple cross with flowers on it stands next to the road in her memory.

Somehow that heartfelt memorial made the dumping above and below it seem even more crass, Bailey felt. He enquired among property owners in the area, including a nearby reserve where there are building operations under way, but they assured him the dumping wasn’t by anyone contracted to them.

“I suspect it’s someone coming from town under cover of dark,” Bailey said.

Grocott’s Mail sent enquiries to several local contractors about their waste-disposal practices, and how they monitored them. Only one response had been received at the time of publishing.

Hain Ackerman of CM Heunis Construction said they have two truck drivers with dedicated trucks. “Our foreman will contact them throughout the day to clean their sites,” Ackerman said. “Our drivers are instructed by our foreman to dispose of the rubble at the refuse tip site.”

They are directed by an official at the refuse site where to offload the rubble.

He said it would require personnel, vehicles and equipment to clear the area.

There was a by-law in place to prosecute illegal dumpers, however, officials needed the public to help. “The public is requested to assist in identifying and report offenders,” Welkom said.

Grocott’s Mail called the Green Scorpions at the Department of Environmental Affairs to ask whether illegal dumping was an issue they might involve themselves in.

“You must first report it to your local municipality,” the official answering the Green Scorpions hotline said. “Only if a local authority doesn’t respond do we become involved.”

Meanwhile, residents in areas close to the municipal rubbish dump on the Cradock road have expressed concern that the fires that happen every year at the dump over Christmas might recur. A fire there last year spread to the Grahamstown Riding Club, razing 26 stables and forcing staff and owners to evacuate terrified horses.

Following questions to Makana Municipality about vacation plans for the site, acting director of social services WIlliam Welkom said there was a new security firm guarding the refuse site.

“They are full time guards to ensure that only those bringing waste in enter, and to keep vagrants out. This is properly controlled,” Welkom said.

He said a standby team would be available during the closing period from 22 December 2017 to the 2 January 2018 consisting of a bulldozer operator, a supervisor and sweepers.

“They will be called in when required,” Welkom said.

“Covering material is being stock piled at the refuse site and daily inspections carried out to ensure all is running according to plan.”