Get set for #BluePurpleBlack Friday 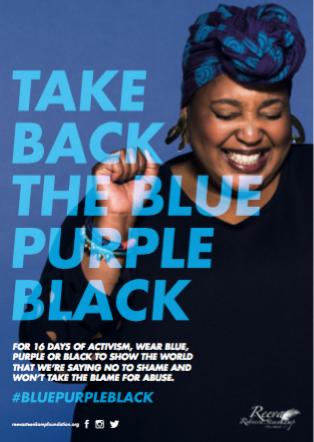 Hard-hitting campaign to educate about abuse: Take Back the #BluePurpleBlack these 16 Days of Activism & beyond

On Friday 8 December, the United Nations will be highlighting the Reeva Steenkamp Foundation’s #BluePurpleBlack as part of their worldwide awareness drive for the 16 Days of Activism.

On this day, the Reeva Steenkamp Foundation together with the United Nations is calling on individuals across the globe to wear blue, purple and/or black in honour of #BluePurpleBlack Day.

Violence, inflicted by an intimate partner, is the leading cause of death among South African women. And in most of these cases, this began as domestic abuse, later escalating to murder/manslaughter.

The Reeva Steenkamp Foundation, a non-profit organisation which aims to empower victims and educate the broader public around women and child abuse, has launched a hard-hitting, multi-national campaign “#BluePurpleBlack,” which aims to destigmatize and end the silence around this societal illness.

The registered non-profit organisation for the empowerment of – and education against – women and child abuse, has seen great traction following the launch of its #BluePurpleBlack campaign, which focuses on creating awareness around abuse.

Kim Martin, CEO of the Reeva Steenkamp Foundation (who is an abuse survivor herself), explains: “#BluePurpleBlack refers to the colours of the bruise – the most intimate symbol of abuse.
“It is important to remember that abuse is not always violent or physical. ‘Bruises’ are multifaceted and span wide: physical, sexual, emotional, verbal, psychological, economic, intimidation, stalking, damage to property, isolation, irrational behaviour and bullying – all bruises.

“We’re saying to men; perhaps you made a partner change her clothing because you deemed it too revealing, or groped a woman without consent in a nightclub. Maybe you stayed silent when someone you knew was being abused. All of these are forms of abuse. They’re symptoms of the same ‘disease’; dehumanizing and causing a fellow human being to feel powerless.

“#BluePurpleBlack is an extension of the conversations which started as a result of #MeToo. This time, we’re asking men to speak up too, through recognising their own behaviour and committing to call out abuse when they encounter it. It’s only through engaging in extensive dialogue that we will start to see a change.”

The Reeva Steenkamp Foundation is calling on the public to wear blue, purple and/or black over the 16 Days, to show their support. “Wearing these colours indicates that ‘bruises’ (abuse) should not be hidden; that victims should not be silenced or ashamed to speak out or seek help, and that we all have a responsibility to call out abusive behaviour.

“With South Africa supporting #BluePurpleBlack, the more awareness we create about the everyday abuse all around us; the more shame we eliminate; the more conversations we catalyze; and the more behaviour we change,” says Martin.

Take Back the #BluePurpleBlack: How you can get involved

About the Reeva Steenkamp Foundation Reeva Steenkamp died on the same day she was scheduled to deliver a speech at a Johannesburg school, speaking out against the abuse of women and children. On what would have been Reeva’s 33rd birthday, her mother June launched the Reeva Steenkamp Foundation in her memory; a non-profit organisation for the empowerment of and education against women and child abuse.

The RRSF has joined hands with Sonke and other organisations for the 2017 16-Days of Activism to unite against the violence and abuse of Women and Children, through the launch of the hard-hitting, multi-national campaign #BluePurpleBlack.