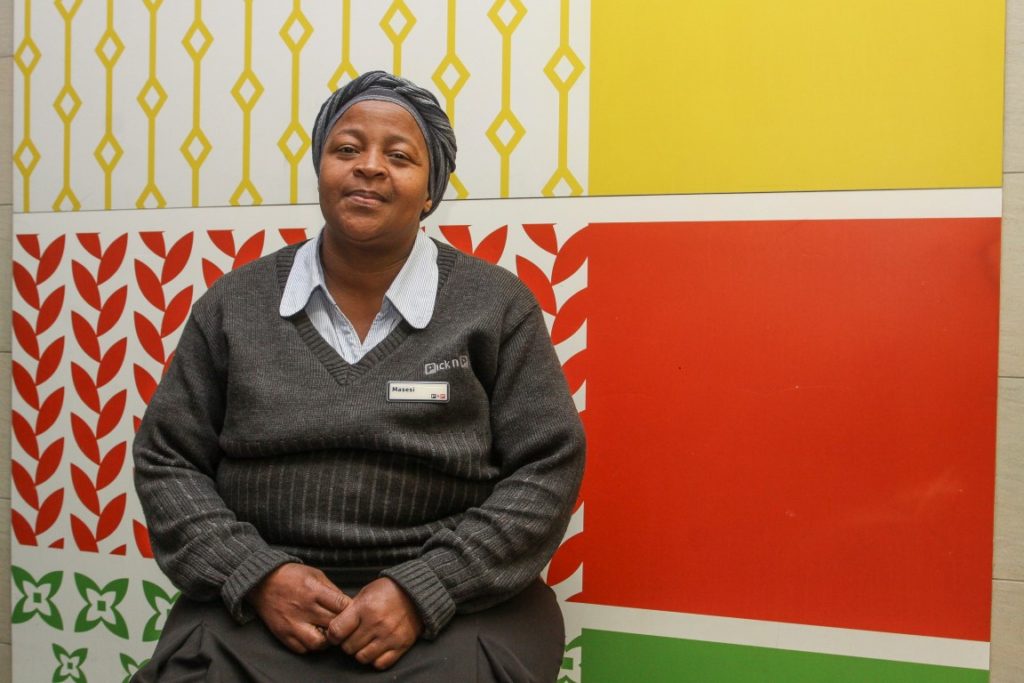 Linda Nkohla smiles cheek to cheek as she recalls her 20 years at Pick n Pay. Joining the team in 1997 as a deli cook and meat wrapper, when the store first opened  and working her way up to a deli manager two years later, Nkohla is grateful for the work that she does. “Smile and good service”, she states are keys to success in her job. She lives with her parents and a 12 year-old son in Extension 6. Nkohla is thankful to her seniors at Pick ‘n Pay for helping her to grow in her career and hopes to have many more successful years. Be sure to smile back at this lovely woman next time you visit the Pick n Pay deli.

Desmond “Chappie” Muir has completed Park Run 41 times. His passion for running carries over into his work, going on 20 years at Pick n Pay in 2018. Muir started as a packer and then moved to security in the back due to the heavy lifting requirements. Chappie stays with his brother who is constantly impressed with his work at Pick n Pay. He enjoys his work hours and loves the staff. Muir is grateful to the Shelton and Campbell families for helping to make his life a working success. Look for Chappie next time at Park Run and say hello!

Masesi and Elias Mohlala have a marriage as sweet as cupcakes. Elias moved from Mpumalanga and started working at Pick n Pay in 1997 when the store first opened. He heard about the job from the Shelton family. “It’s a good time!,” he says. Elias started as a baker before becoming a receiving manager in the bakery. He loves to bake (especially cupcakes) and thinks his children enjoy his hobby too. His wife, Masesi, joined Pick n Pay in 1999 as a cleaner. She shortly moved to a baker position and spends her workdays baking fresh pies, pizza, speciality breads, rolls, cakes and tartes. The Mohlalas stay in Fingo Village and have four grown children. They would like to thank the Campbell and Shelton families for all their help and support.

Sabelo “Bongo” Mentjies keeps the butchery shelves fully stocked. He started at Pick n Pay in 2003 as a merchandiser, before moving into the storeroom, and finally to the butchery. He enjoys working with poultry the best, and takes pride in keeping the shelves stocked and looking neat. Mentjies was in desperate need of money and work, and thankfully his senior managers had a place for him. Mentjies stays in Hlalani with his two young sons. “I would have nothing without this job,” he says. Mentjies would like to thank the senior management team because “they’ve been good to me”. He loves working with customers; so don’t miss him behind the butcher counter.

Carol Zimmerman may live in an old-age home, but don’t let that fool you. This woman is as sharp and hardworking as ever. She started with Pick n Pay in 1999, and has worked all over the store. From a packer and cashier, to the deli and lotto, Zimmerman now finds herself upstairs working in admin. “People are my company”, she says. She loves the staff and the work that she does. “I think if I didn’t work, I wouldn’t be around and about”. Zimmerman was born and raised in the Eastern Cape and is happy to call Grahamstown home. She would like to thank her “fabulous” bosses and the rest of the Pick n Pay staff.

Nomawethu Magadla has been pushing the boundaries since she joined Pick n Pay as a packer in 2007. As a young, single, black South African woman, Magadla has taken success into her own hands. She was forced out  the University of Fort-Hare in Alice after falling pregnant with her son, Lelona. Though a drastic change for Magadla, she found inspiration and strength in her son and family in Extension 5 to push forwards. She  overcame the odds too. Within two years of starting at Pick n Pay she was asked to assist one of the senior managers with the opening of a sister store in Mthatha. She now works in management, and enjoys interacting with staff as a way to help her create her “own management style”. Her work at Pick n’ Pay has helped to re-inspire her family and put Lelona into a good school. She is “grateful and blessed” for her job and wishes to give a big thank you to the Campbell and Shelton families, as well as a tribute to the late store manager Johanne Pienaar.