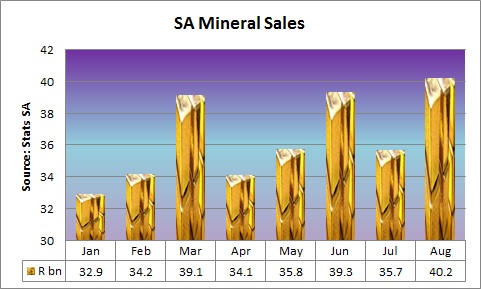 There is no direct one to one correlation between production and value added, which is what is measured in GDP, but they normally tend to have similar growth rates.

Economists tend to focus on the production data, while people with families to feed tend to follow the money.

Mineral sales showed a 18.2% year-on-year (y/y) rise to R40.2 billion in August after a 17.6% y/y gain in July to R35.7 billion. It is this R40 billion that is putting food on the table and why the BankservAfrica Economic Transaction Index (BETI) moved into positive y/y growth in August. The BETI, which is compiled by Mike Schussler of economists.co.za, showed that the poor business and consumer confidence that had held back economic activity since the March cabinet reshuffle and consequent ratings downgrade to junk status seemed to have been broken in August, as the number of transactions grew by 6.1% y/y to a record 95 million. The nominal monetary value of those transactions rose by 9.3% y/y to R817.9 billion, which was the first time that a month outside of December exceeded the R810 billion level.

The quarterly mining production data showed that only four out the 12 mining categories had negative growth in the third quarter compared with the second quarter, while for manufacturing, there were also only four out of ten sectors that had a negative impact.

With manufacturers gearing up for the peak retail season of Christmas, one should expect a strong manufacturing production performance in the fourth quarter as inventories at both manufacturing and retail level are fairly low. The 115% y/y increase in the maize harvest should see a surge in grain mill product output, which fell by 1.1% in September compared with May, when harvesting started, compared with a 3.7% jump in other food products such as pickles over the same period.