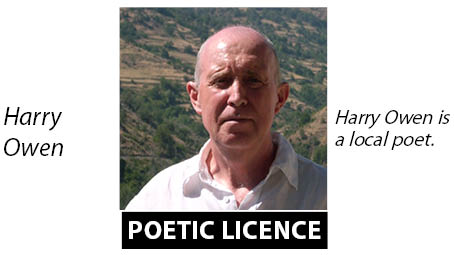 Occasionally someone will ask me, rather disdainfully, ‘What’s the point in writing poems about animals or nature? Surely there are more important things than that?’. Those ‘more important things’ are invariably human concerns such as injustice, poverty or crime. And yes, they are important, unarguably so.

But the implication seems to be that unless we address such topics openly, nakedly, loudly, all other poetry is somehow shallow and inconsequential.

The best poetry deals with what it means to be human. Our societies, cultures, attitudes and beliefs both mould us and are moulded by us. But we are also a fragment of something larger – the natural environment. If we allow ourselves to, we can learn a great deal about ourselves from this environment.

As invariably with the best poetry, words are used to imply and suggest rather than to state categorically. Such poems may be based on powerful feelings, but rather than lecture about rights and wrongs they encourage us to consider where (and how) we fit into things. Although many people equate ‘nature poetry’ with a lightweight, Hallmark-cards doggerel, there is nothing twee or saccharine about real poems.

Here are some that invite us to contemplate in this way. I would argue that their animal or nature themes help us explore some deeply important human matters.

Grahamstown poet Andrew Martin, for instance, reminds us that a beached whale and human suffering are not so very different when seen from a world where “hope is / just a word”:

if we were to look

we would see them

memorials to an unseen scourge –

a whale on a beach

a man without pride

left searching for the end

because you saw them

(from For Rhino in a Shrinking World, Poets Printery, 2013)

Alaskan poet Emily Wall’s work is certainly whimsical, but it also asks something of us: what do we do with our lives that a dog or a cat might urge us to do differently?

This is not a poem about dogs

This is also not a poem about cats,

with their terrible grace,

and the way they make any woman ungainly.

This is not a poem about

babies and their hungry mouths, mewling

This is not a poem about

spine of an unread novel.

If this were a poem about these things,

it would be a poem full of wishes,

It would be a poem about the way

a dog looks, running along the hard-packed

herding a flock of sandpipers and gulls –

If this poem were about that dog,

it would be a poem of such longing,

And who has the time, anyway,

And so, we’re left with DH Lawrence’s pithy observation of a reptile – or is it of us?

A lizard ran out on a rock and looked up, listening

no doubt to the sounding of the spheres.

And what a dandy fellow! the right toss of a chin for you

and swirl of a tail!

If men were as much men as lizards are lizards

they’d be worth looking at.