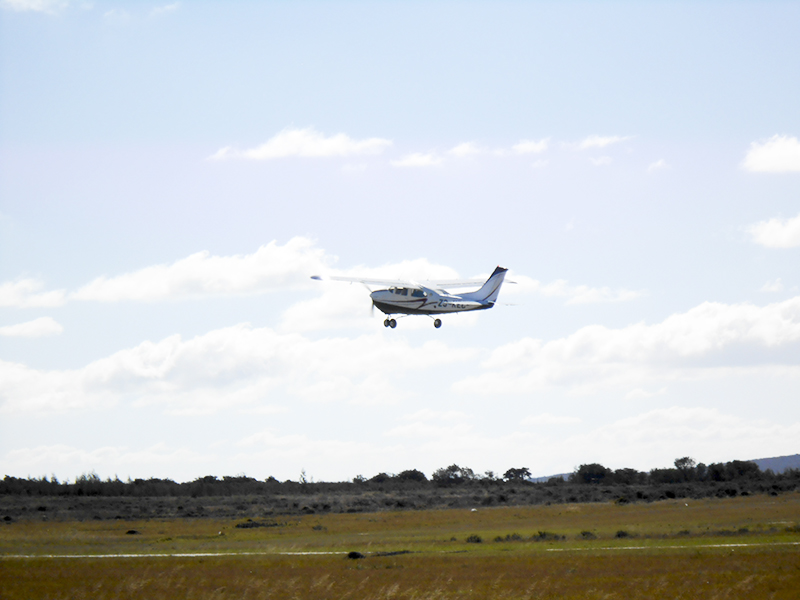 A plane takes off at the Grahamstown Aerodrome in this September 2017 file photo. Skilful piloting narrowly averted disaster last weekend when there was livestock on the runway during a landing. Photo: Alex Oosthuizen

It was only exceptional skill that averted an on-ground collision with livestock at the Grahamstown Aerodrome last weekend and a councillor has since warned that failure to secure the facility could see Makana sued for millions, and the aerodrome closed down.

The Grahamstown Flying Club reported on social media that pilots had experienced two potential life-threatening incidents with cattle and horses on the runways on Saturday 11 November.

“We wish to sincerely thank the Makana Fire Department for their immediate response and removal of the animals,” the Club said in their post. “Livestock… grazing on and around the aerodrome runways, taxiways and restricted areas has become commonplace. Access gates are opened without authorisation and left ajar.”

The Club appealed to the public to understand how dangerous this was.

“Livestock impacting a landing or moving aircraft on take-off roll can lead to fatalities. We would also remind the public that unauthorised movement on a registered aerodrome or the direct or indirect placement of obstacles on operational aerodrome areas contravenes the SA Civil Aviation Act (13 of 2009) and is a criminal offence… If convicted of an offence, prison sentences of up to 15 years may be imposed.”

Phil Machanick of the Grahamstown Residents’ Association (GRA) said livestock straying on to the airfield was a real obstacle to the often-mooted plan for commercial flights.

GRA secretary Tim Bull said the GRA was keen to ensure that livestock owners got the support they were entitled to from the municipality.
“If this happened then stock owners would have less reason to send their animals to unsuitable places like the airfield,” Bull said. “The airfield is especially dangerous and this infringement has very serious implications because the self-evident danger means that the further operation of this facility could be threatened. We hope that this publicised incident will provide enough urgency and motivation for Makana that it cannot happen again.”

The GRA along with SAPS, the Stock Theft Unit, Provincial Traffic, Makana Traffic and the Makana Parks rounded up and removed 148 stray cattle and 8 donkeys in a raid on 19 October.

Manager of the Grahamstown Riding Club Adrienne Carlisle said the stray horses found at the airfield belonged to residents of Hooggenoeg who had no way of confining their animals. The Club is opposite the airfield.

“There is no doubt in my mind that there will be a terrible accident involving livestock on the Cradock Road,” Carlisle said. “People drive fast and there are dozens of cattle that hang around.”

In the Makana Council porftfolio committee meeting for Social Development on Wednesday 15 November, councillor Brian Fargher said an inspection of the Grahamstown airfield by civil aviation authorities was scheduled for next week and with the facility in its current state it was unlikely the licence would be renewed.

“There are 502 metres of fencing missing on the airstrip,” Fargher said. “We could be sued for millions because of direct violation of the civil aviation act with cattle and horses on the airstrip.”

Referring to last weekend’s incident, he said, “As a municipality we have a liability – our insurance won’t even cover it. We could be sued for millions – let alone the potential loss of life.”

Fargher also pointed out that when the wind blows from the south, waste from the dump blows on to the airstrip. “We have a major problem on our hands,” he said.

Asked for confirmation about the impending inspection, Ron Weissenberg of the Grahamstown Flying Club confirmed that the Civil Aviation Authority does regular inspections of registered airfields and facilities as well as checking of aeroplane and pilot credentials.

“We are normally not informed of the exact dates, so can’t really comment,” he said.

Criteria for aerodrome inspections by the SA Civil Aviation Authority (CAA) depend on the aerodrome category, Weissenberg explained.

“Port Elizabeth airport, for example has a higher category than Grahamstown and requires fire engines, backup power systems for runway lights etc. As we understand, the inspectorate will be looking for the basics – proper secure fencing, condition of the runways, runway numbering and confirmation of facilities such as runway lights.

“If the CAA inspectorate fails the Grahamstown Aerodrome, they have the right to cancel the registration, which means removal from international databases, GPS positioning and the issuing of a NOTAM (Notice to Airman) with the respective sanctions.”

Committee Chair Phumza Matyumza had earlier in the meeting praised the prompt action of the fire department in removing the animals.

By the time of going to press Makana Municipality had not yet responded to a request for comment.

On their post, the GRA recommended that for assistance with stray livestock the public should call Thando Dlalani 071 787 3948 during office hours and the Fire Service after-hours at 046 622 4444.

Makana Parks Manager Jeff Budaza said stolen and damaged fencing is a major obstruction to managing livestock in and around Grahamstown and animals are able to escape or enter freely. The department is aware of the need for fencing and repairs around commonage areas, Budaza told Grocott’s Mail, but lacked the funding to do so.

Also critical in managing Grahamstown’s stray livestock, said Budaza in an interview this week, was the difference between perceptions in different residential areas.

“In Grahamstown West, stray livestock is a major concern,” said Budaza. “But in Grahamstown East, it is accepted as normal.”

The majority of the livestock found in Grahamstown are not branded, making it difficult to identify the owners.

Stray livestock had a negative effect on Grahamstown’s overall image, as well as local business and plant life, Budaza said, adding that the animals attract cattle egrets – which make a smelly mess under the trees where they nest.

In response to countless complaints from residents of Grahamstown West, every morning and evening Makana staff drive the livestock across the river into Grahamstown East, Budaza said. This tedious process occurred every day, for there was no local stock pound available. With no funding available, this is not on the immediate horizon.

Makana and the SPCA reached a stalemate over facilities and funding earlier this year that has not yet been resolved.

“We have urged livestock owners to form their own group as a means to communicate and stay informed,” Budaza said. “Livestock owners have also requested that community members and students refrain from feeding any stray animals, as this contributes to their presence in urban residential areas.”

Makana Parks was due to hold a second meeting with stock owners last night, Thursday 23 November.