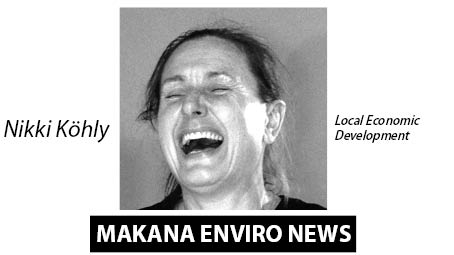 Dr Stephanie Januchowski-Hartley recently gave a talk, “Rivers, our connected waters”, hosted by the local branch of WESSA. The dynamic young president of the Freshwater Working Group, Society for Conservation Biology, took the audience on a fascinating tour of selected rivers of the world. She used of her findings in the USA Great Lakes Basin and her ongoing research in France, where she now lives and works, to show how rivers connect waters and lands, and also connect people.

Eileen Shepherd, Chair of Grahamstown WESSA, was particularly struck by Stephanie’s findings on how human-made dams, weirs and culverts fragment rivers and affect migratory species such as Salmon from returning to their rivers of origin to breed.

A dedicated researcher and educator, Stephanie has travelled the world working to improve our understanding about freshwater ecosystems, and relationships between humans and nature. She communicates and shares stories about science, conservation and nature through diverse mediums including poetry, art, and blogging.

Find out more about her work on Twitter @ConnectedWaters

The “Upper Kowie Integrated Catchment Management Strategy”, released in June this year, highlighted the public health hazard posed by overflowing sewerage pipes leaking untreated sewage into streams and rivers in our town. David Bligh of the Department of Water and Sanitation warned of the potential threats to our water quality posed by these leakages in various parts of town, as well as blocked filter grates, and our Waste Water Treatment Works facilities being vandalised as well as operating over design capacity for years on end.

In the Belmont Valley WWTW, the perimeter fence has been down for years, there are broken effluent pipes, and a wall break released a flow of untreated water into the Bloukrans River. The DWS issued “Pre-directives” to Makana for both Mayfield and Belmont WWTW on 5 August 2013.

The Bloukrans River flows into the Kowie River near Port Alfred, where that town’s potable water intake is located.

Another game-changer is to re-use grey water to flush your loos. By using your waste water a second time, your home produces less waste water in total.  The cheap option is filling buckets of used shower water, laundry water, etc, and pouring it into the toilet to flush it manually. There may be some mess and spill, but it works just fine.

At home, your garden will always be grateful for a little sprinkling of urine – no need to tinkle in the toilet. Wee does the same job as chemical fertiliser, but costs you nothing, and is non-toxic!

The more upmarket – and very convenient – option is to get a professional to install a greywater flushing system in your home. Only flush when you need to, mind. My system from Green Overall works fantastically!

Interested and affected parties must submit comments by no later than 5pm on 22 November.

Copies of the report can be found in the Grahamstown Public Library, or contact SRK Consulting for an electronic copy: Wanda Marais, 041 509 4809, wmarais@srk.co.za

Humpty Dumpty sat on the wall, and after the sell-out, he’ll have a great fall. There’s so much egg on the face of Numba Wahn that it’s come to be seen as ‘business as usual’… ho hum, humpty dumb. But the great fall will come, and the shower will come tumbling after. The supply of free fire pools will dry up. And the same will happen to the corrupt clot who was trying to grease the way for petroleum giants to frack up our water-scarce Karoo, and for a Russian nuclear deal despite the low need and high risk.

It’s time to change gear and get rid of sell-outs who don’t give a jot about socio-ecological justice.