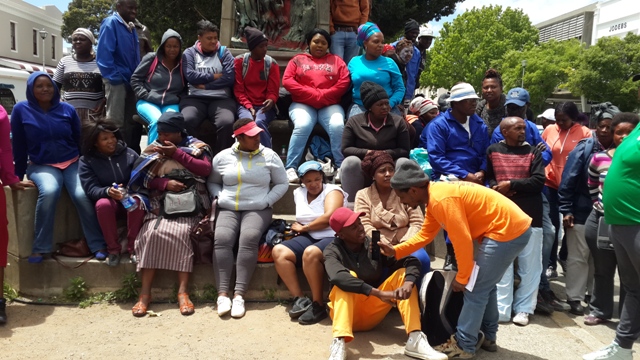 Grahamstown’s head of police stepped in when around 30 unpaid contractors gathered in protest outside the Makana Finance Department in High Street on Thursday 9 November.

On 31 October the three community work project (CWP) 10-person crews had completed two-thirds of a three-month contract on the Riverbed Project – a programme run by Makana’s Parks Department.

“Last month we were meant to get paid by 20 October and we weren’t,” said one of the protesters, Akhona Ngcungca.

“It is the same even now: we still haven’t been paid.”

Ngcungca said they’d come to demand payment and had been told by an official in the Finance office that he couldn’t tell them exactly when they would be paid. She said the police had been called to removed the large group from the building.

“We are not leaving until we know what is going on with our money,” Ngcungca said.

When Grocott’s Mail arrived, head of the SAPS Grahamstown Cluster Brigadier David Kanuka was in discussion outside with the teams’ supervisor, Thando Dlalani, Environmental Officer in Makana’s Parks and Recreation Department.

Kanuka, Dlalani and two SAPS officer then went inside for a meeting with Deputy Director: Expenditure in Makana’s Finance Department, Marius Crouse.

When they emerged, the Brigadier addressed the group, telling them first that their protest was illegal and they needed to apply for permission from the police station for such a gathering.

Then he summed up the cause of the delay in their payment.

”There are lots of different people who have to sign these documents,” said Kanuka. Some of those signatories were unavailable and there had been some incomplete documentation.

Kanuka asked the crowd to give the municipality at least 10 days to complete the process.

”The documents should be scrutinised within seven days,” Kanuka said. “Your money should be in by next week Friday.”

He advised the group to select representatives to talk to the municipality about their problems and said Dlalani would work hand in hand with them to avoid conflict in future.

The Brigadier then asked them to return to their workstations and they left.

Team leader Nomathamsanqa Mavikela said a total of 124  workers from various wards in Grahamstown, Alicedale, Fort Brown and Riebeeck East were paid R120 a day to clean up the municipality’s water systems, earning a total of R2400 a month.

Between 8am and 3pm, Monday to Friday, the four groups removed invasive plants as well as rubbish from the stormwater ditches and the Matyana River itself. Their contract finishes at the end of November. – Additional reporting by Sue Maclennan