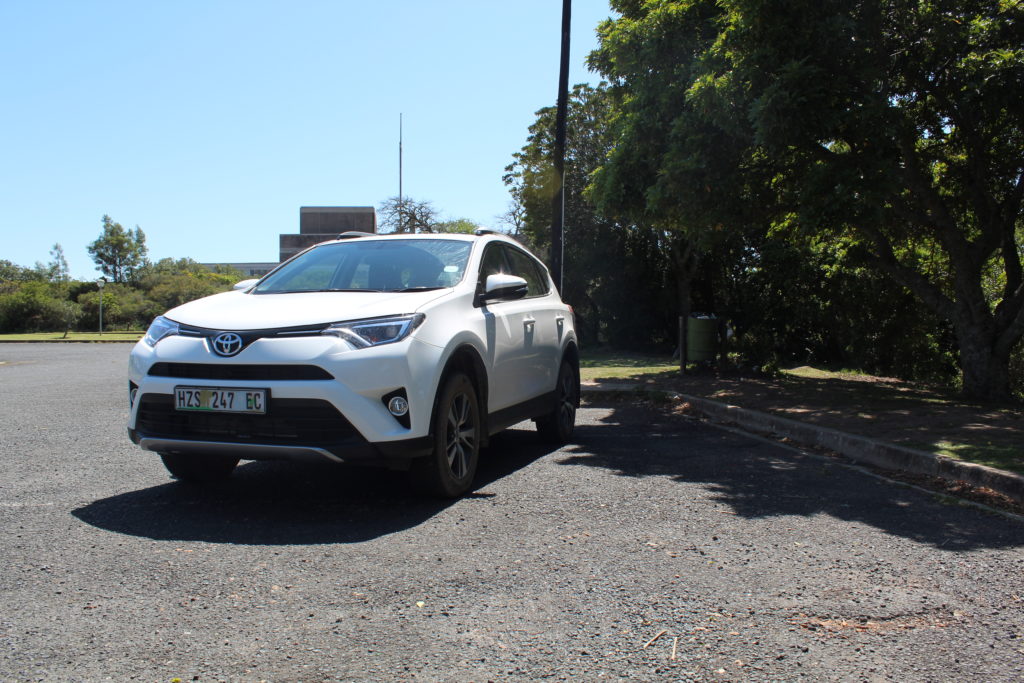 This week the test car was a 2017 Toyota RAV4 2.2D-4D AWD GX, with optional leather trim, now made standard in the 2018 facelift model. Toyota initially debuted the production RAV4 in 1994, and it served as a pioneer for what is now a hugely successful compact SUV market. The RAV4 (standing for Recreational Active Vehicle with 4-wheel drive) served as an all-rounder between traditional off-road vehicles and passenger vehicles, and was an instant roaring success. Now the compact SUV market is exponentially popular in South Africa, due to the general mindset of consumers and the vehicle’s multi-purpose nature.

The new car appears over-styled, with the triangular design housing the fog lights on the front bumper and large grille. However, the design seems futuristic, and is definitely not a drawback. The wheels are 17 inch alloys, offered standard with the GX trim edition, and are striking in appearance. Inside, the wheel is comfortable to hold with the infotainment system placed directly in the middle of the dashboard and the climate control system below that. The seats are also comfortable and widely adjustable, with the perfect amount of legroom in the rear seats for a car of this size.

The gearbox is superb, with a smooth and pin-point accurate selector, all designed to be a perfect mix between on-and-off-road. The lack of top-end power is noticeable, although the torque value more than makes up for it. I am no stranger to turbo-diesel engines which are known for being punchy and powerful especially in the low-end, and Toyota has produced a fine example of this “rugged” engine variant.

The highway cruises comfortable, with only minor engine and road sounds filtering into the cabin. The ergonomics make it comfortable for cruising as centre console is a perfect armrest, which left me in a relaxed mindset as I had perfect confidence in the car’s steering.

The RAV4’s sport mode I found quite useless. It seemed that all it did was sharpen up the steering, because in corners the car felt just as soft as it normally does. Then again, this is not marketed as a sports car, but as an optional fuel saver, with the eco mode achieving a fuel consumption average of 5.6l/100km, which is rather impressive for a turbo-diesel motor.

It was also a lot easier to manoeuvre in city driving than I’d expected, although the reverse camera is below par for a car of this value and could do with a quality upgrade. Anyway, the dimensions of the RAV4 make it easy to see your blind spots along with the flat hatch so you can always basically tell exactly where your rear is. The new RAV4 has succeeded in becoming the perfect compact SUV for all seven days of the week.

With its base price of R374 500 it is a bargain compared to pricier competitors like the Audi Q3 (starting at R507 500) and BMW X1 (starting at R546 700). There could be competition from the Ford Kuga (cheaper at R368 800), but the RAV4 retains value longer, has greater off-road capabilities and after-sale services, and the Kuga has that other problem from not too long ago.

Toyota has built up incredible brand loyalty in South Africa through virtually indestructible engines that last at least a decade, and this model should be no different.