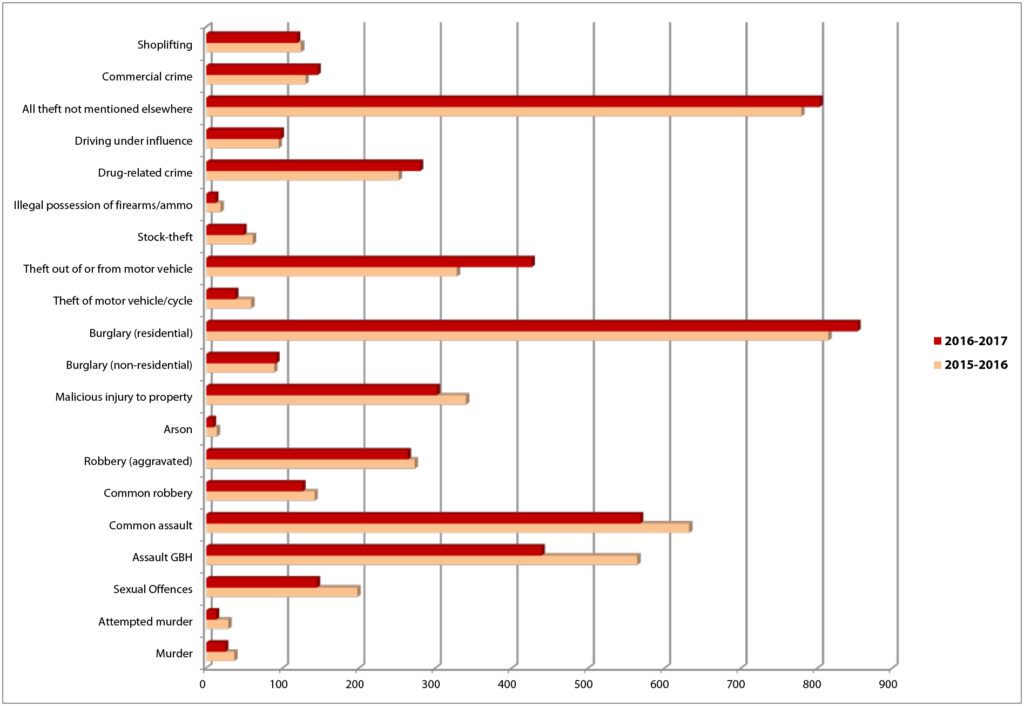 If you live in the parts of town that report to the Grahamstown Police Station, the chances are quite high that in the past year your business premises were burgled, or something was stolen from your car. If Joza is your closest police station, you probably know someone who was burgled, or robbed in their home.

Among South Africa’s nine provinces, the Eastern Cape sits somewhere in the middle when it comes to crime statistics as reflected in the presentation, Crime Situation in South Africa: 1 April 2016-31 March 2017 (bit.ly/GrocCrime2016_17), released last week by the South African Police Service. In most categories of serious crime, Gauteng leads, with Western Cape and KwaZulu-Natal runners-up. The Eastern Cape is often fourth.

However, an innovation in this year’s presentation is that where the target of a crime is a person – Murder, Attempted Murder, Sexual Offences, Assault GBH, Common Assault and Common Robbery – the presentation also includes a graphic to show what proportion of each province’s population those crimes have affected.

However when represented as a population ratio per hundred thousand, the picture changes dramatically with the Eastern Cape leading the country in murders with a shocking 55.9/100 000. The per 100 000 ratio of people affected by murder in the Western Cape is 51.7. In KwaZulu-Natal 36.6, Free State 33.3, Gauteng 29.3 and Northern Cape 28.6. Limpopo is the lowest at 14.2.

Stock theft shot up in the Eastern Cape (by 3.9%) as did drug-related arrests (up 9.8%), making the Eastern Cape fourth after Western Cape, Gauteng and KwaZulu-Natal. “Unrest” that elicited a public order response was up 4.2% across the country.

In a media statement following the release of the crime stats, DA MPL Bobby Stevenson said the Eastern Cape was caught in the grips of “a vicious crime wave that is striking fear into the hearts and minds of the people of this province”.

He said drastic action needed to be taken including an overhaul of the vehicle management system so there are more visible police patrols and rapid response units available.

In our accompanying graphic, figures for Joza and Grahamstown police stations have been combined to present overall crime statistics in the town. However, here are some stats selected from the separate Grahamstown and Joza police station tables:

The good news?
Grahamstown experienced no bank robberies and no cash-in-transit heists from 1 April 2016 to 31 March 2017.