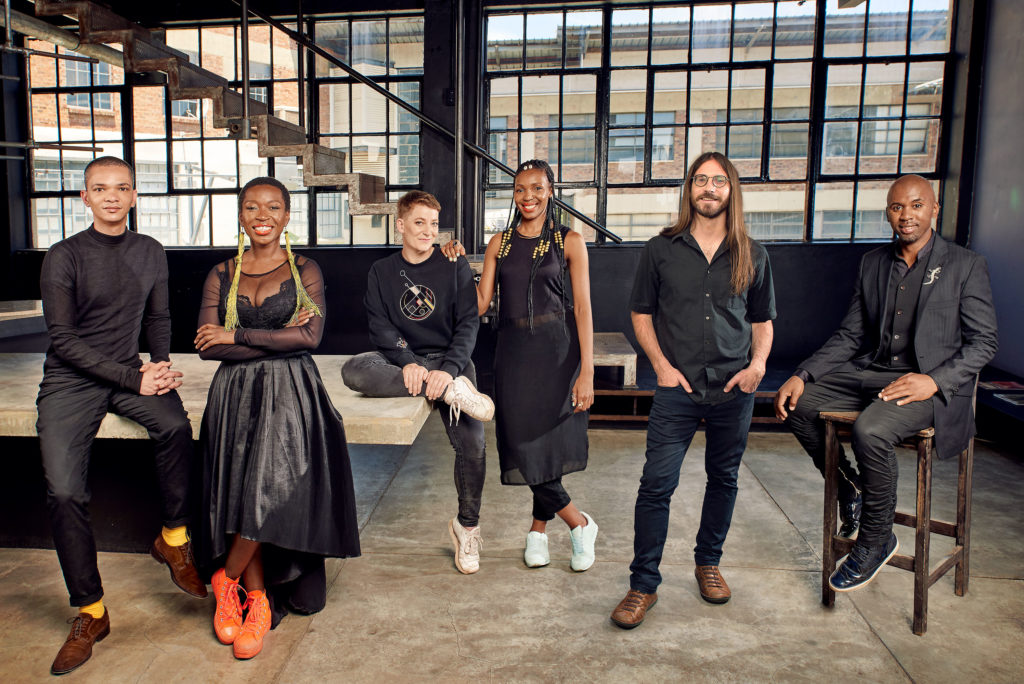 Chuma Sopotela is a performance artist whose practice reflects the versatility of skills she commands. She is fast gaining broad respect as an actress, dancer, puppeteer and all round performing artist. She balances her love for traditional theatre with the complexity and conceptual challenges offered by performace art in a refreshing way.

Guy Buttery is an immensely talented composer and guitarist. He plays like a man on a search to stretch the boundaries of fingerstyle guitar to their outermost limits and he is winning. Buttery has found a way to play his unique style of guitar that is deeply South African while also speaking a global musical language. There’s credibility to his being described by pundits as a South African musical treasure.

Igshaan Adams is an exciting visual artist who is finding a creative and refreshing language to discuss faith, gender and identity. His lavish tapestries and sculptures made from strings, beads, found fabric and steel delve into code complex concerns regarding Islam and cultural hybridity.

Jemma Kahn as a ground breaking theatre practictioner, has found a fascinating way of using a Japanese form of street theatre, the Kamishibai to explore uniquely South African themes with universal reach. Her multi-instalment, autobiographical story, In Bocca al Lupo has shored her up as a leading light for her generation of theatrical story tellers.

Musa Hlatshwayo is a prodigious talent with great promise as both dancer and choreographer. He has performed with various local and international dance and theatre companies. Hlatshwayo maintains a professional practice that is as focused on creative rigour and invested in grassroots community development work.

Thandi Ntuli is a leading young pianist and composer among a rich cadre of South Africa’s young crop of jazz musicians. Her broad musical vision has seen her shine in various musical contexts. Ntuli plays with equal excitement alongside experimental outfits where she collaborates with a vinyl spinning DJ or in the company of a classic jazz band or the philharmonic orchestra.

South Africa’s Minister of Arts and Culture Mr Nathi Mthethwa extended a congratulatory note to the artists: “Congratulations to all the Standard Bank Young Artists on their awards. You are a shining example of the talent and commitment of South African artists and we look forward to seeing more of your work realised in the years to come.”

The strong partnership between Standard Bank, which has sponsored the award since 1984, and the National Arts Festival has helped develop South Africa’s cultural treasury that reflects the country’s artistic past as well as serves to inspire new generations of artists, performers and musicians.

Hazel Chimhandamba, Head of Group Sponsorships at Standard Bank notes that: “Over the years the Standard Bank Young Artist Awards have grown in stature and continue to provide a wonderful platform and opportunity for the winning artists to bring their work to a national and international arena. It has created a rich legacy while providing role models for future generations to value, respect and aspire to whilst enriching and expanding the country’s cultural landscape.”

National Arts Festival Executive Producer Ashraf Johaardien adds, “The Standard Bank Young Artist platform is about securing and investing in the future of the arts. The list of illustrious Awards alumni dating back to 1984 includes iconic creatives like William Kentridge, Mbongeni Ngema, Johnny Clegg, Sibongile Khumalo, Helen Sebidi, Mathinus Basson, Robyn Orlin, Darrell Roodt and others like them whose practice and artistic vision have helped shape the South African cultural landscape. Every year when we deliberate on the next crop of winners our purpose is to find the next generation of artists whose work holds the promise of that kind of impact. Having had the opportunity to engage with each of the 2018 winners and their current body of work, I am confident that the Artistic Advisory Committee have succeeded in doing just that.”

The award winners in the various artistic genres are selected by the National Arts Festival Committee, chaired by Brett Bailey. All decisions regarding winners are made jointly by the committee. The winners receive a cash incentive, and are given support to develop and premiere new works that will be featured on the Main Programme of the 2018 National Arts Festival in Grahamstown next year.