RMR wraps up a year 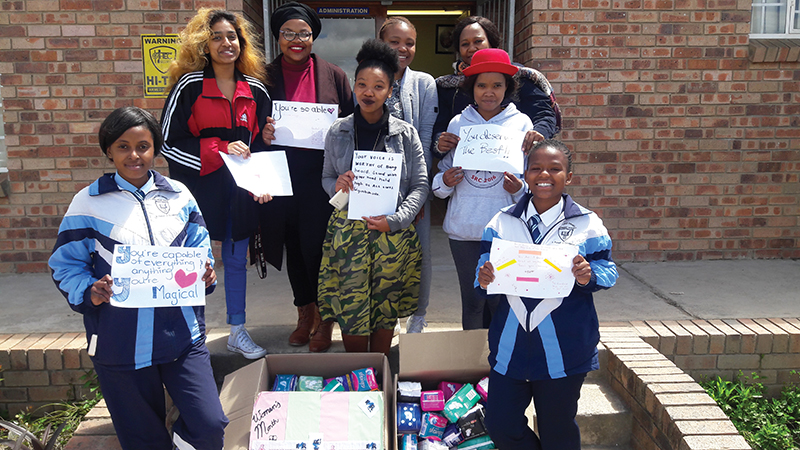 RMR recently handed over a box of sanitary pads for Khutliso Daniels as part of their Sanitary Pad drive. Photo: Supplied

Rhodes Music Radio organised a series of activities to benefit the community and strengthen its relationship with Grahamstown .

In the beginning of 2017, RMR set up a community engagement representative in its RMR club and the marketing division was tasked with exploring projects for the benefit of the community. Inititally  they collected sanitary pads for grade 12 learners. During the handover, messages of encouragement were also handed to the learners to ensure none would miss her exam due to the call of nature and also be a boost to confidence by eliminating one thing to worry about. Khuhliso Daniels Secondary School was the beneficiary and the hand over was a success with the help of Nosi Nosipho Nkwinti, Senior Coordinator for Community Relations & Student Organizations  at RUCE, Rhodes University.

The RMR club then worked to raise funds for Sibyane Special Day Care Centre in Joza that caters for kids with disabilities. Their most important needs were listed and the club started to raise funds. Second hand clothes donated by Rhodes students were the start. On the day of the sale, Grahamstown residents cleared out the three boxes of clothes within minutes. The club members also sold brownies to add to the donation. In an emotional handover event the creche was blessed with two emergency first aid kits, which they had wanted for a long time.

Christmas also came early when the centre received individual Christmas gift packs and balls to play with at school. The community engagement rep, Zimkhita Kweza expressed her excitement at seeing the kids smiling and happy, considering that in some families, kids with disabilities are still hidden and made to feel awkward. She found that the “the process of raising funds was not an easy one and at times you need more hands than you actually have to work with.”  Zimkhita, couldn’t contain her emotions, “I wish what we started today can be a beginning of a journey for many years to come”.

Raymond Mojapelo, Rhodes Music Radio station manager echoed the sentiment of his colleagues by saying that it was RMR’s intention to make an impact on the lives of the youth of Grahamstown. Raymond said that RMR broadcasts to a 50 km radius in and around Grahamstown and the station had enjoyed the support of the youth for a long time so the station wished to touch lives locally.  The future intention is to introduce even more initiatives that empower youth, share skills and build a society to be proud of.