My garden… an island 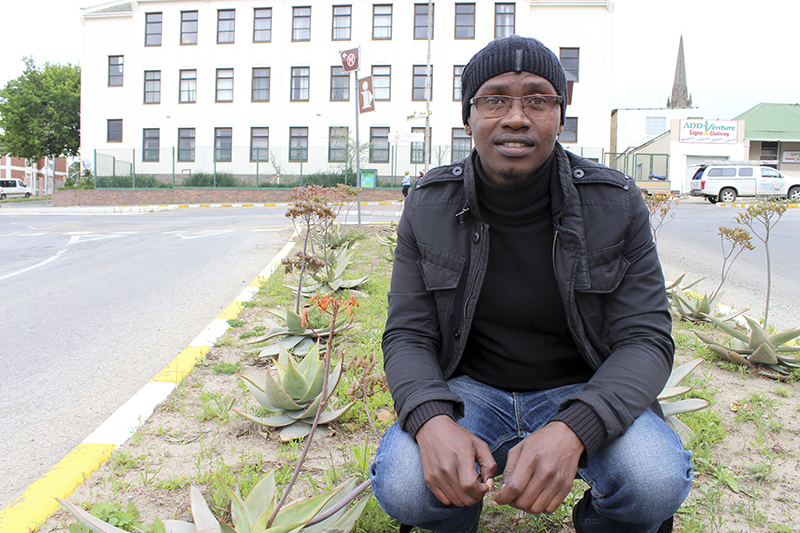 Thando Dlalani, Environmental Officer at Makana Parks and Recreation Department since 2014, shows off the garden on a traffic island that eventually worked.

Grahamstown’s traffic islands have been a long story, that started a few years ago when the number of stray animals in town started growing – and became a big story when the effects of the drought really started kicking in.

“Cows prefer grass,” says Dlalani. “But when there’s a drought, the cows

will eat everything that’s green – leaves, bushes, vegetables. Even flowers.”

The story of the traffic islands also involves the Grahamstown Residents Association, which repainted and cleaned up some of the city’s islands during an extended clean-up campaign last year, together with a team who went on to form the Bopha Cleaning Company.

“We came and planted here,” said Dlalani, “The plants didn’t make it, but the donkeys loved it.”

Indeed, anyone who passed the area at that time would have seen happy donkeys grazing on the island, or resting on the sidewalk opposite.

“Because of the animals and the fact that we can’t water the islands, we had to come up with a plan.”

Enter the aloe. Waterwise and not tasty to cows or donkeys, they’ve stayed the course so far.

“Our aim is to ensure street islands and verges are planted for the beautification of the town,” he said.

Once again the GRA is in support of this programme, with funds from yesterday’s Rapportryers fun run donated to a project that aims to improve the Grahamstown city centre.

“GRA members will plant indigenous plants, mainly aloes, at high profile locations such as High Street, together with rocks and cobbles, to make attractive hard-wearing features,” the organisation said.