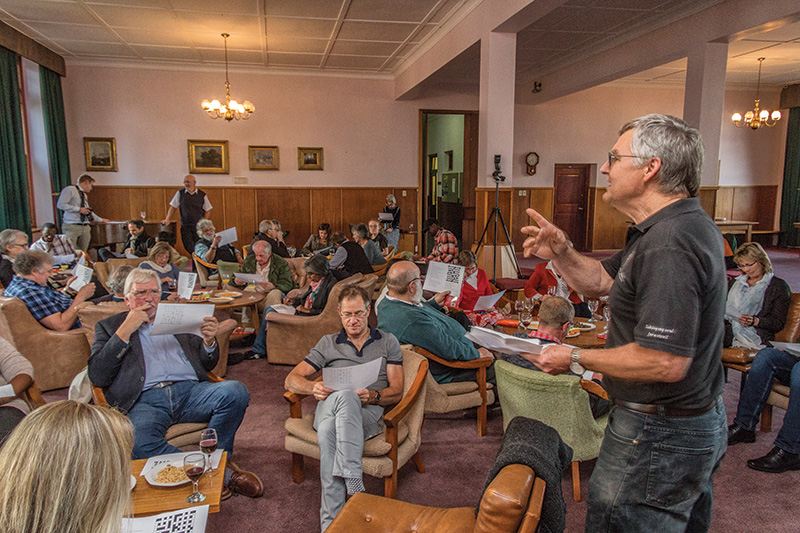 “Crosswords may not matter, but they’re a game between consenting adults.”

International crossword afficionado and best-selling author Sandy Balfour was in a provocative mood at the launch of a compilation of more than 100 homegrown original South African cryptic crosswords last Friday evening in Grahamstown.

The labour of love (and conviction) of Grahamstown social entrepreneur and educator George Euvrard, it was piloted in Grocott’s Mail and also published later in the Mail and Guardian.

Balfour lives in England and so the puzzle he quoted to illustrate the delight of a good cryptic crossword clue was very apt:

The answer, of course, was ‘D’ is May – i.e. Theresa May, England’s current Prime Minister.

Euvrard spoke about the genesis of the puzzles and the beauty of a well constructed clue.

“You mean what you say, but you don’t say what you mean.”

Normalising the use of a mixture of South African languages was one of Euvrard’s goals, as a gesture towards inclusivity.

“South Africa is one of the biggest social engineering experiments in the world,” Kaschula said. “It’s a uniquely multilingual and multicultural society, and George has tapped into this.

“South African English is the window through which we see our world – the place where culture and identity come together.”

* If you’re not a crossword fanatic and wonder what this headline was about it’s only part-cryptic: George launches his crosswords