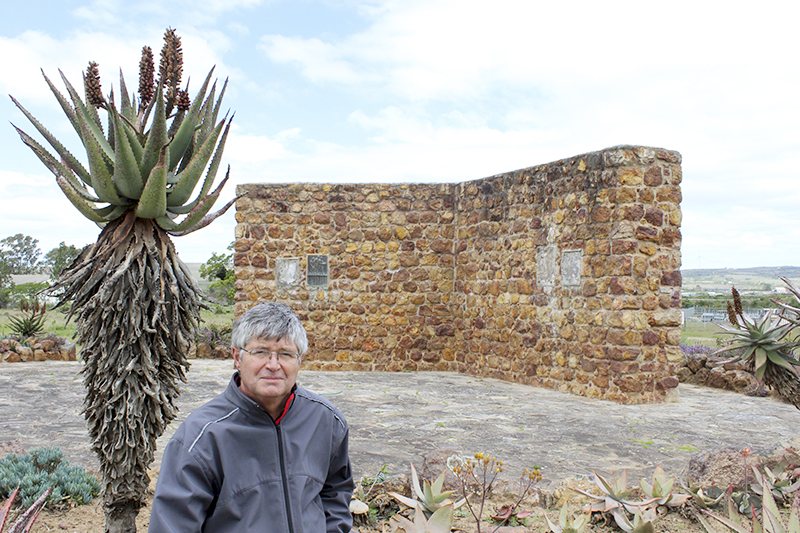 CASH FOR MEMORIES Strauss de Jager, a Rappportryer leader and minister of the NG Kerk Grahamstad, yesterday expressed shock at the theft of three brass plaques from the Bible Monument in Strowan Road. Story on Page 2. Photo: Sue Maclennan

Rapportryers Grahamstad leader Strauss de Jager expressed shock and sadness at the theft of three brass plaques from the Bible Monument in Strowan Road. The plaques depict the historic hand-over of a Bible to Pieter Uys’s party of Voortrekkers outside Grahamstown in 1837.

Speaking at the site yesterday, De Jager said it wasn’t certain when the 55-year-old plaques had been removed.
“We have someone from Rapportryers whose responsibility it is to maintain the site. They came here this morning and that’s when they discovered the plaques were gone,” he said.

Police spokesperson Captain Mali Govender said yesterday afternoon that no case docket had been opened yet, however the theft had been reported telephonically yesterday morning.

“You know, the thing about this site is it’s actually a monument to friendship,” De Jager, who is the minister at the NG Kerk in Grahamstown said.

It was a gesture between two groups that were often in conflict with each other.

According to the Graham’s Town Journal of 20 April 1837 Pieter Uys with a party of 23 wagons and about 100 people was camped outside the town on their way to join the other Voortrekkers. He had his family, headed by his father, Jacobus Uys, with him.

Residents of the town had raised funds to buy a Dutch Bible, on the front cover of which was embellished in gold lettering: “Geschenk van die Inwoners van Graham’s Stad en nabyheid aan den Heer Jacob Uys en zyne weggetrokkene landgenoten.” (A gift from the inhabitants of Graham’s Town to Mr Jacobus Uys and his departing fellow countrymen.)

That Bible is now housed in the museum at the Voortrekker Monument.

The Bible Monument as it stand today was the project of an editor of Grocott’s Daily Mail, Dirk Pretorius who motivated for the building of the Bible Monument which was unveiled by state president CR Swart on 17 December 1962. The brass plaques were made by Ivan Mitford-Barberton – the same artist who made the Settler Family sculpture on the lawns of the Monument.

Two plaques were put up for the 1962 ceremony, and another two later, to add to the story.

“I just wonder how much money they actually got for that,” De Jager said. “It really can’t have been very much at all.”

He said they would have to think about how to secure the remaining plaque – possibly even removing it and replacing all four with plastic replicas.

If you think you may have have information about the theft, you should contact the Grahamstown Police.

* Additional sources: ‘The Story of the Bible Monument’ by Mrs B.E. Rennie

Below: The four plaques that were on the Bible Monument until recently. The one on the top left is the only one that remains.