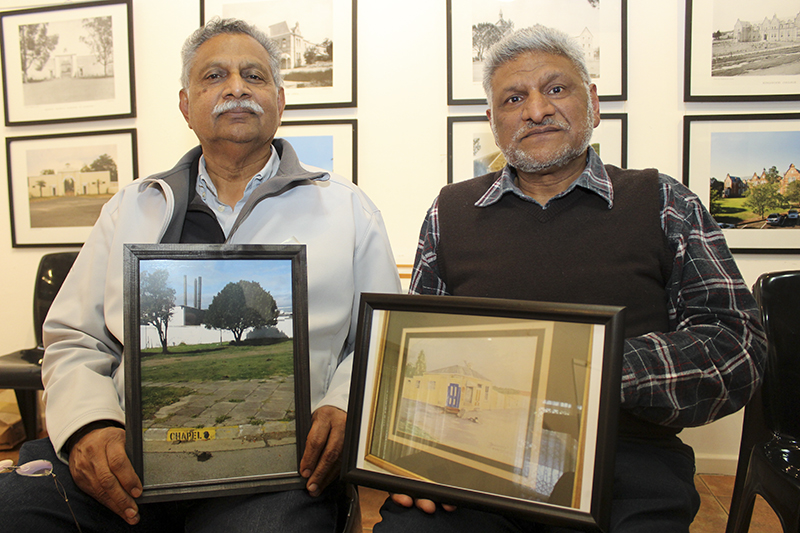 Brothers Jack and Harry Rama were among the Grahamstown residents who shared memories of a more integrated Grahamstown before the forced removals of the 70s, at an event titled ‘Remembering Forced Removals’ hosted by Rhodes University’s Isikhumbuzo Applied History Unit at the Eastern Star Museum Wednesday night. Here Harry (right) holds up a painting of the family’s Chapel Street home on the corner of Chapel and Queen Streets before it was demolished. Jack (left) holds up a photograph of the vacant plot that remains today, around three decades later. More about the project in next week’s edition. Photo: Sue Maclennan

Having the largest effect on Grahamstown’s Indian, Coloured and African residents, the Group Areas Act served to displace and destroy the very roots of these communities.

Tears slid down Harry Rama’s face as he recalled his own story of the Group Areas Act, “all for nothing”, he called it. Rama’s childhood home on Queen Street was repossessed by the government and bulldozed to the ground for redevelopment purposes. To this day, the plot where the home once stood remains completely empty except for an old avocado tree (that still bares no fruit).

“It was all for nothing!” Rama emphasised.

Rama shared his painful story at an event organised in part by the Rhodes University Department of History and third-year public history students. The students were required to embark on a social research project that looked to uncover the ways in which Grahamstown’s Indian community was affected by the Group Areas Act. Students interviewed local families and created websites showcasing the information to the public.

The event on 18 October took place at the Eastern Star Gallery, and was led both by students and Dr Julie Wells, head of the Isikhumbuzo Applied History Unit. Community members involved in students’ projects were invited to come and share their stories, old photographs, and newspaper clippings as a way to remember the forced removals of the Group Areas Act.

The event was a great success, and laid a strong foundation for future community work and student research on the impact and history of the Group Areas Act in Grahamstown.

Special thank you to the families who willingly shared their stories and their time; the Harjeven, Rama, Gopal, Daya, Narsai, Naran, Dullabh, Ranchod, and Sonne families.

Previous ArticleRecycling is back in town!
Next Article Petrol price to increase at midnight