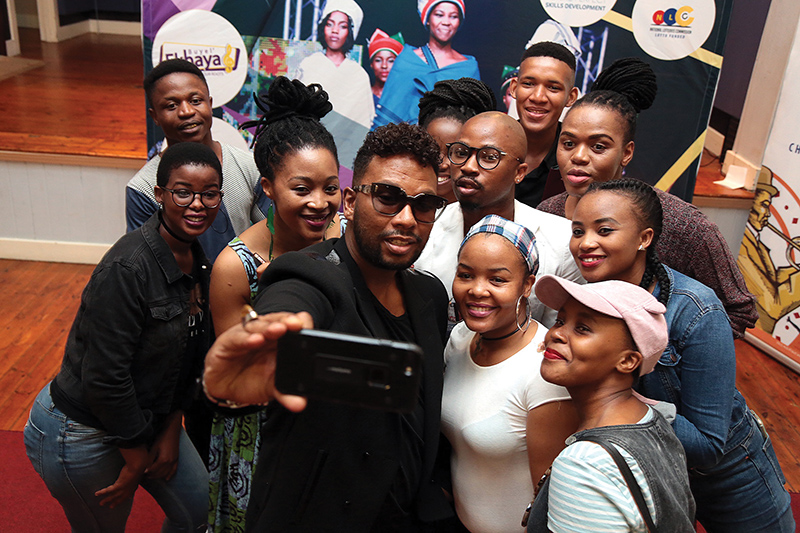 OCTOBER 23, 2017 South African fashion pioneer David Tlale taking a selfie with the chosen finalists at the Miriam Makeba Centre yesterday where 10 designers were chosen to go to JHB and be mentored by Thula Sindi as part of the 2017 Buyel'Ekhaya fashion development programme Picture: MARK ANDREWS

On Monday, 23 October, acclaimed designer David Tlale facilitated the second Buyel’ Ekhaya Fashion Development Workshop attended by over 70 aspiring young fashion designers and students at the Miriam Makeba Centre of Performing Arts in East London.  The day ended with the announcement of 10 finalists from all over the Eastern Cape who will travel to Johannesburg to be mentored by renowned designer Thula Sindi  from 6 November to 15 November 2017.

At the BFD workshop, the young designers received invaluable advice from industry veteran Tlale who was also part of the adjudication panel who went through their creative portfolios and selected the 10 finalists. The panel was made up of Regional Manager of The Fibre Processing and Manufacturing (FP&M) Seta Lungile Ngwenya , SABC Head of Radio Marketing Siphelele Sixaso, Head Designer of Monarchy Couture Archibald Monyepao, fashion designer  Freddy Ngwenya and Walter Sisulu University Fashion Technician Sibusisiwe Nodada.

The promising designers who will travel to Johannesburg to take their first big steps into the fashion world, under the guidance of respected designer Thula Sindi are:

During the 10-day mentorship at the Thula Sindi studios the young designers will produce two garments each to be showcased at the second  BF fashion show to be held on 15 DECEMBER at the Orient Theatre in Easter London under the theme “Going Back To Our Roots”. The show will be headlined major names Laduma Ngxokolo (MaXhosa), Tlale, Sindi, Gert-Johan Coetzee and Mozambican designer Taibo Bacar.

About Buyel’Ekhaya Fashion Development Programme
The BFD programme is an empowerment initiative of the Buyel’ Ekaya Pan African Festival and is made possible through the support of National Lottery and  the Fibre Processing & Manufacturing Seta, among others.