Not yet time to make a splash 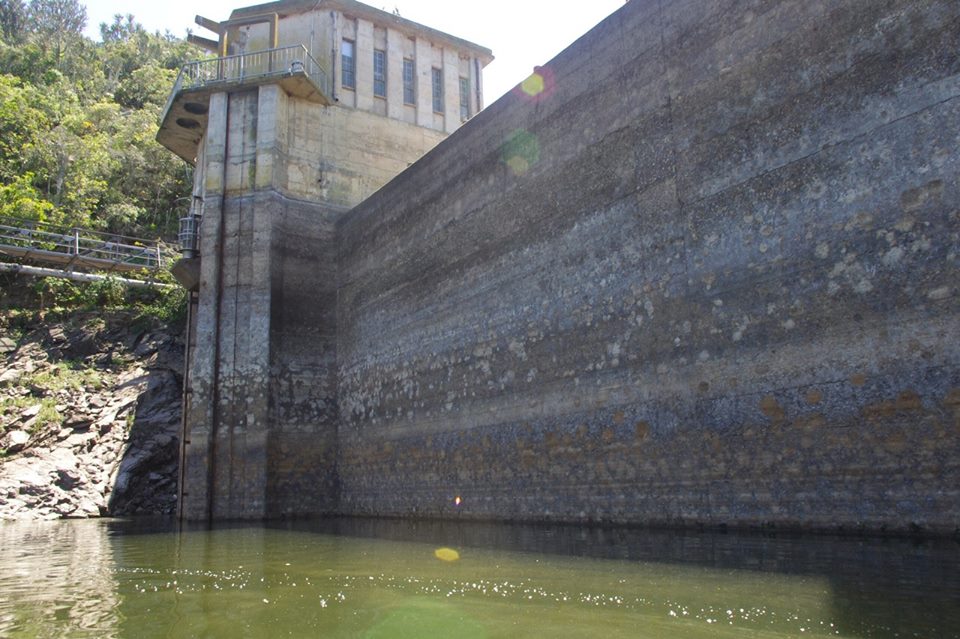 The wall at Settlers Dam. The dam's gauge shows it at 0.5% which is incorrect. It's impossible to measure and estimates are anywhere between 10% and 15%. Photo: Tim Bull Yes, Howieson’s Poort has recovered from 18% in September to 51% on 22 October thanks to recent rains. This is good news, but only part of the story.

Settlers Dam is our main store of water. It is fed from two streams that are not flowing and also from overflow when Howieson’s Poort Dam is full. We are still in a very serious position because Settlers Dam is lower than ever. Below about 25% the gauge doesn’t work and is currently showing 0.5% which is not true. Settlers is hovering somewhere just above 10% – it might be 14% or even 16%.

It is good news that Howieson’s Poort Dam has refilled by over 30%, up from 18% to 51% today (Sunday 22 October). Our usage at full rate is about 1% per day. Makana are applying emergency measures – which means reducing flow at night and also making transfers from James Kleynhans so that we are actually drawing about 0.5% per day. So the effect of recent rains may mean up to 60 days longer before we get back to the critical situation we were in a month ago.

What all this means is that ‘normal’ supplies should now last until January (instead of end of November as previously stated). And the news may be even better as rain water is still running down into Howieson’s – meaning that it could offer 70 or 80 days supply (February?).

But everyone needs to realise that we are entering 2018 on a much lower base than 2017, so we need far more rain to recover to a secure situation. Settlers hasn’t begun to refill and we need it to reach around 60% to feel reasonably secure.

Unlike Cape Town, we will not run out entirely because we have enough to cover about 60% of Grahamstown’s needs from the Orange River, via Glen Melville Dam and James Kleynhans pumping station.

But 60 % supply will still be very inconvenient, and as you know, once supply is reduced we tend to get more pipe breaks and outages.

The more we can do to make ourselves secure against a few days without water and to reduce our demand the better. Grocott’s Mail this week has carried a special supplement on water security, including details of rainwater tank installers. GRA will place details of contacts on our website to help you. We do not endorse or vouch for any installers, you must decide for yourself who you trust.

Message from Makana: “Residents are encouraged to attend the upcoming General Makana Water Forum Meeting on 31 October 2017 at the City hall at 10 am.”