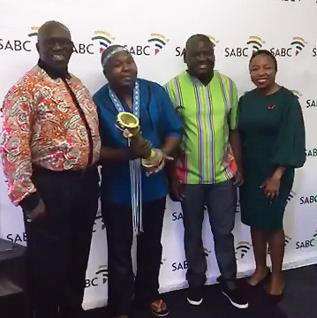 Rhodes University student, Natalie MacLarty with her brother Graeme. Both have made the South Africa Polocrosse team for the World Cup in Australia in April 2019. Photo: Supplied

Rhodes University student Natalie MacLarty, 22, has been selected to represent South Africa in the Polocrosse World Cup in Australia in April 2019. Only eight players make up the women and men’s team.

This will be MacLarty’s second World Cup since she started playing polocrosse at the age of 14 at her home farm in the Elandslaagte district, KwaZulu Natal. She participated in the 2015 tournament that saw South Africa being crowned champions.

The 2nd year B.Pharmacy student is particularly excited about her selection, as she will be playing alongside the world’s best male polocrosse player, her brother, Graeme.  What she calls the icing on the cake is the fact that her father, Bruce MacLarty, is the head coach of the South African team.

“Polocrosse has always been a family sport in general, but more so for our family. My mother played in the 2003 World Cup, my brother and my father are going into their third World Cup,” she enthused.

Growing up in an isolated farming area between Newcastle and Ladysmith, Natalie and her brother had the pleasure of having horses as playmates. Before her teen years, she was interested in Show Jumping, but she eventually gave in to the family preference of horse sport.

Polocrosse is a mixed gender sport that started in farmyards in the late 1940s as recreational competitive sport for distant neighbours. The numbers have increased, but the lack of sponsorship is slowing the progress. Although the sport is bigger in KZN, the momentum is picking up in Gauteng and the Western Cape.

There are eight countries competing at the 2019 World Cup; Zambia (runner-ups in 2015), South Africa, England, Ireland, Zimbabwe, Australia, Canada and New Zealand. Australia has never lost a tournament at home, meaning SA has to work harder and smarter to keep the cup.

“Australians are highly competitive, especially in their own backyard. It does not help that they will be playing with their own horses, whereas we have to choose stranger horses. But, I think we will be fine because Australia plays a horse sport with a ball, whereas we play a ball sport on a horse,” she chuckles.

Natalie is nervous about the prospect of having her father coach her for another World Cup. “My father and I have an incredible relationship outside the sport. When he is a coach, it does put a strain on our relationship because he is extra hard on me compared to other players. So I have to strictly see him as Coach Bruce,” she said.

Despite a demanding academic schedule from a Faculty most perceive as the hardest to get a qualification from, Natalie intends playing high-level polocrosse for a long time. She is passionate about the sport because it keeps her mentally and physically fit.

“I love and embrace pressure; after all, great moments arise from great opportunities. The Faculty has been understanding and accommodating, that has been incredible. I thought it would be a struggle, I am so happy to be part of such a Faculty that allows me to pursue all my interests,” she said.

The next year, Natalie says, will be spent preparing for the ultimate challenge and enjoying her Pharmacy studies. Although this is her first year at Rhodes, she is doing her second year Pharmacy because she already holds a degree in BSc in Genetics.

“It is a lot of work to juggle sport and pharmacy, but clearly I love putting myself under pressure. I am fascinated by how medicine interacts with the body and eventually heals, so I have been enjoying my first year here at Rhodes,” she said.

A team sport that is a combination of polo and lacrosse. It is played outside on a field on horseback with six players per team. Each rider uses a cane or fibreglass stick to which is attached a racquet head with a loose, thread net, in which the ball is carried. It is made up of the Attack player who scores goals, the Centre player who acts as both an offensive and defensive player, and the Defence player.

Polocrosse is for everybody; boys and girls from the age of seven to people over 50 years old.

The first African countries to play the game was Zimbabwe and South Africa (Durban) in 1948. The game has developed to the extent that there are now in excess of 6 000 players worldwide, with international competition being held regularly at senior, junior and veteran levels.