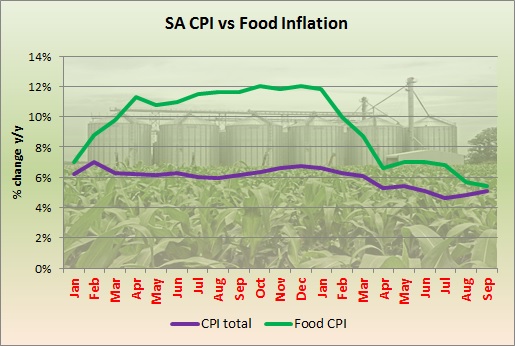 What is notable is that the food index for bread and cereals declined by 2.8% y/y in September, as the record maize harvest is being processed, while the index for oils and fats decreased by 3.3% y/y as the record soybean harvest is turned into oil.

The index for fruit fell by 4.4% y/y, while that for vegetables edged down by 0.5% y/y as better rains lead to larger crops. On the other hand, farmers are replenishing their herds, so there is less supply of meat, which pushed up the price of meat by 15.6% y/y in September. A wrinkle here is the recent outbreak of avian influenza, which has resulted in the culling of large numbers of chickens. Given the weight of poultry in the overall food price inflation, the spreading avian influenza will remain a key upside risk to food inflation over the foreseeable future.

Core inflation, which excludes volatile components such as food and energy, was steady at 4,6% y/y in September and August from 4.7% y/y in July after being steady at 4.8% y/y in June, May and April. This steadiness in the core measure shows that inflation expectations are well anchored and if this rate moves below 4.5% y/y then one should expect a further repo rate cut by the South African Reserve Bank.

On a Grahamstown level, consumer inflation for the Eastern Cape rose to 4.8% y/y in September, which is below the national rate of 5.1% y/y, from 4.2% y/y in August.