At the heart of the ANC’s internal struggle 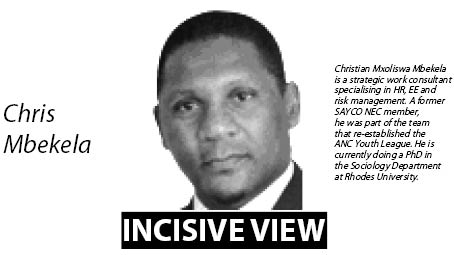 A democratic space is a new site of the struggle that requires innovative modi operandi. Here, one needs to offload old ways of doing things. The strategies and tactics used in the past are irrelevant to the present situation.

The tripartite alliance should have redefined its role within the present context in order to make an impact in society. It should have also re-visited its structural architecture in order to avoid the unnecessary schisms that have made it dormant.

These schisms may appear as if they are political and ideological in nature. However, when you place these schisms under the radar, you can establish that by and large they are non-political and non-ideological. They are mainly informed by self gratification and self satisfaction achieved through rewards in the form of deployment, lucrative opportunities and extra-ordinary sponsored benefits. Uncontrollable power struggles should be located within this context. Ideological posturing that appeals to popular sentiment is used to permeate strategic levers of power.

The latter is used as a means to distribute patronage benefits within a factional value chain to the last person on the ground floor. Patronage has shattered the spinal cord of the alliance. Reports presented by the outgoing secretary general of the ANC Gwede Mantashe attest to the fact that organisationally, the Tripartite Alliance does not exist. Such reports were adopted as a true reflection of reality, in theory and in practice. It’s difficult to tell where those who speak on behalf of the Alliance derive their mandate. Without prejudice, this means the Alliance has disintegrated into thin air.

Interestingly, contenders for power outside the ANC framework are not providing the nation with a workable alternative trajectory. It seems they do not have a strategy to exploit the existing weaknesses within the mainstream politics.

Right now, in South Africa, we need a robust and competitive political environment that does not guarantee any political party absolute control. Dynamic leadership across the spectrum is needed to ensure South Africa goes back to the notion of reconstructing and developing the evolving nation. Leadership with new perspectives on all fronts is needed as of yesterday.

Deafening silence on measures to address historical imbalances is of great concern. The obsession with the December elective conference has taken the eye off the ball. Let’s hope it’ll be convened successfully and deliver on its outcome. The political ground is tense and may affect the proceedings of the conference. Stakes are so high that if consensus is not reached on key issues, the conference could go either way.

The SG’s role is critical in any conference: should that person’s impartiality be doubted, anything can happen.

Opinions have already been expressed, cautiously though, questioning the incumbent’s impartiality in the build-up to the conference. Some of these concerns test the right to freedom of expression.

Every individual has a right to express his or her opinion on a particular matter. Sometimes a political environment can be created to test the tenacity of other forces at play. When political equilibrium on the ground is not assured, uncertainty can be created around organisational powerhouses central in the processes leading to the conference.

The balance of forces is tilted in different ways. It is recommended that this column be read in conjunction with that of the previous edition.