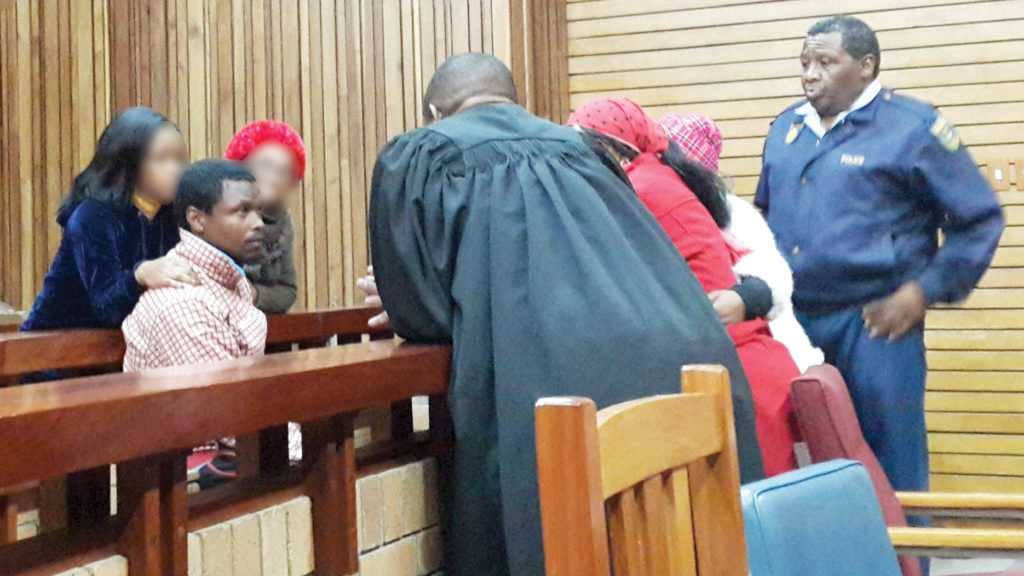 Siviwe Gqotholo, surrounded by his family, consults with Advocate Templeton Solani in the High Court in Grahamstown this week after his sentencing to 18 years imprisonment for his role in the torture and murder of Thembelani Qwakanisa in October last year. (Photograph altered to obscure the faces of family members.) Photo: Sue Maclennan

Thembelani Qwakanisa was killed “in the most callous and cruel way imaginable” on the basis of an accusation that was probably false. Judge John Smith had strong words last week in the high court in Grahamstown in sentencing Siviwe Gqotholo to 18 years imprisonment for his part in the murder of the 29-year-old man whose body was found dumped in Extension 6’s Zion Dam just over a year ago. Qwakanisa had been accused of stealing a laptop computer.

Gqotholo appeared last month with his four co-accused, Thembani Onceya, cousins Akhona Onceya and Simamkele Theron Onceya and Mzwanele Degree Maki in the same court. Their plea in the 5 September hearing remained not guilty and their matter has since been set down for 4-8 December. Each has their own legal counsel. Gqotholo is represented by Legal Aid advocate Templeton Solani. Gqqotholo’s trial was separated after Judge John Smith accepted his guilty plea to acting in common purpose in causing Qwakanisa’s death in October 2016.

Last week, the Judge recounted some of the worst acts of torture endured by Qwakanisa before he succumbed to his injuries, as described by Gqotholo in a detailed confession on 5 September. The judgment weighed these “barbaric acts” against Gqotholo’s personal circumstances in determining whether to impose the discretionary minimum sentence of life imprisonment for an act committed in common purpose.

He noted Solani’s submissions that Gqotholo was a first-time offender who, at the age of 30, was living with his mother. Gqotholo’s father had died when he was very young. Unemployed, Gqotholo received a disability grant because of mental illness.
He’d passed Grade 12 and enrolled for a Management Diploma at Walter Sisulu University, but had abandoned his studies because of mental illness.

A psychological report recognised a history of bipolar disorder combined with drug abuse. Gqotholo had been under the influence of drugs and alcohol when he committed the assault and claimed a lesser role.

These factors were countered, the Judge said, by overwhelming aggravating circumstances.

“The deceased was tortured in the most cruel and inhumane way possible,” Smith said. “One cannot help but be horrified at the unimaginable suffering before he succumbed to his injuries.”

He recounted the worst of the torture, namely that Qwakanisa was forced to drink boiling water, had his teeth extracted with pliers, was burnt with melted plastic, was assaulted with a hammer and other blunt objects and had his private parts stapled.

“The assault was protracted,” the Judge said. “There was enough time for you and your co-perpetrators to come to your senses.”

According to Gqqotholo’s account, the events began on 2 October. Several people had taken turns to assault Qwakanisa as he denied knowledge of a laptop belonging to Thembani Onceya, allegedly stolen the previous night. Episodes of brutal assault were punctuated with trips to smoke drugs, drink alcohol and visits to friends. Friends and relatives wandered in and out throughout. It was around midday on 5 October that Qwakanisa’s body was recovered from Zion Dam in Extension 6, wrapped in a carpet from the Onceya home.

Thembani Onceya is a former Rhodes student and citizen reporter with Grocott’s Mail.

The Judge cited the submission by Senior State Advocate Heinz Obermeyer that the fact Qwakanisa did not confess, despite the torture, meant that “in all probability he was innocent of stealing the laptop”. He spoke of the emotional and financial effect of Qwakanisa’s death on his elder brother and mother.

“This type of violent and cruel crime is coming before the courts more frequently,” the Judge said. “Society expects a strong expression of the abhorrence of this violent conduct and the sentence should send a clear message that these types of barbaric acts will not be tolerated.”

He sentenced Gqotholo to 18 years’ imprisonment.