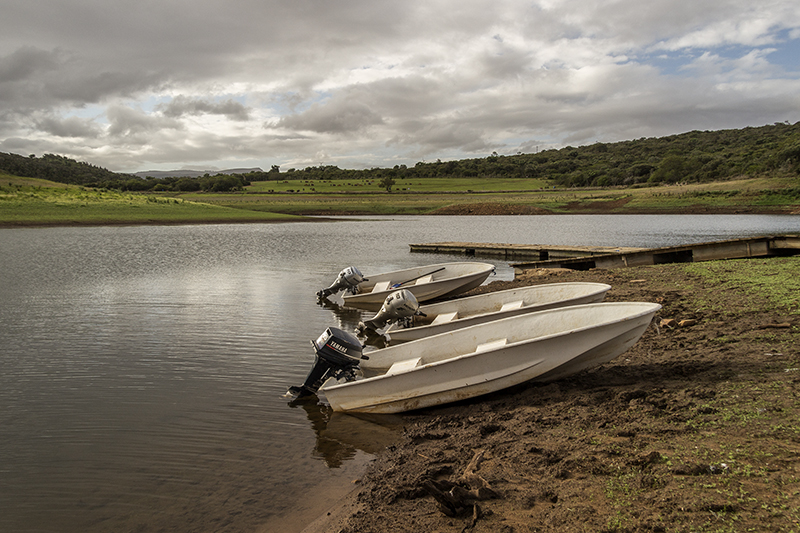 Settlers Dam, Thursday 12 October. Official reports have it at 18% but the level is too low to measure with exiisting equipment and some estimate it is as low as 15%. The green areas in this photo are usually covered with water. Photo: Simon Pamphilon

Settler’s dam might run dry by the end of November and Makana Municipality says if this happens, it will be not only the city’s old, leaking infrastructure that is to blame, but residents in west Grahamstown who are disregarding water restrictions.

In a statement issued via Communication Officer Yoliswa Ramokolo yesterday afternoon, Makana said the municipality had officially declared a state of disaster in the municipality in May, due to dwindling dam levels as a result of drought conditions.

“In such situations the Disaster Management Act allows for a local authority to declare that they cannot cope with their resources, and the Act allows for funds to be re-prioritised due to a state of disaster,” Makana said.

“Then, Settler’s dam was at 29 percent and Howieson’s Poort at 76 percent. Since then the situation has become dire and could lead to severe water outages if residents do not play their part.”

“The municipality responded to this challenge by enforcing water restrictions in partnership with the Department of Water Affairs, but residents have not adhered to these,” Ramokolo said. “It has also come to the municipality’s attention that some residents on the Western side of town have illegally connected municipal water to their Jojo tanks instead of relying on rain water. This is illegal and those who are doing this are warned to refrain from doing it.”

Numerous leakages due to old infrastructure that couldn’t be fixed immediately due to lack of specialised fittings and funds and alien vegetation in the catchments of the dams feeding the Western side were making the situation worse.

Following emergency planning meetings Makana had decided to re-impose the existing February 2016 water restrictions along with other means of saving water.

“Makana Municipality continues to work in partnership with the Department of Water and Sanitation, the Institute for Water Research and various community stakeholders to try and find ways of preserving the water that’s currently available and to raise awareness about the dire situation we face.”

Residents were encouraged to attend the upcoming General Makana Water Forum Meeting at 10am on 31 October.

Dams in the Eastern Cape remain low in spite of the heavy rain that fell in the past few days  and people must continue to use water sparingly, the DWS said in their weekly update. On average Eastern Cape dam levels were at 55.4%, a slight increase of 0.4% from last week, the Department said.

The level at Howieson’s Poort Dam west of Grahamstown was Tuesday reported at 18.2% – a .2 percent increase over last week. While Settlers continues to be reported at 18%, the actual level cannot be measured because the water is too low.

“This improvement does not in any way mean that people can now be reckless or irresponsible because we are not out of the woods yet,” the Department said.

Xilinxa Dam in Butterworth had improved to 0.8% from 0.2% last week but remained a concern to the department.

“People in that part of the province still depend on water tankers to get water,” the Department said. “The planned
pipeline from Tsomo to Butterworth will contribute towards bringing relief to
Butterworth as part of a long-term solution.”