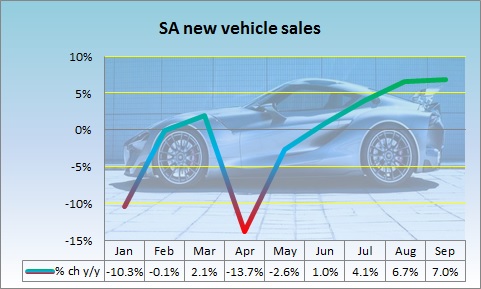 Manufacturing production returned to growth in August after four months of year-on-year (y/y) contraction. Output rose by 1.5% y/y in August compared with the consensus forecast of a small (0.05%) decline.

The major factor was a large 11.3% y/y jump in the basic iron and steel, non-ferrous metal products, metal products and machinery sector. This was because steel and aluminium are key inputs in car manufacturing, which saw a 11% y/y rise vehicle exports to a record high in September, while new vehicle sales in the domestic market increased for the fourth consecutive month. The surge in this sector had already been signalled by the 24.4% y/y boost in August to South Africa’s steel production to 554 000 tonnes. As steel production is an important indicator of a country’s economic health, this should reassure policy makers and economists that growth is on track after the surprise quarterly contractions in in the fourth quarter 2016 and the first quarter 2017.

It is to build on this progress that the Broadwalk Conference Centre in Port Elizabeth will be hosting the second Eastern Cape Manufacturing Indaba on 20 October. Trade and Industry Minister Rob Davies will be giving the keynote address, while Athol Trollip, the Mayor of the Nelson Mandela Bay Metropolitan Municipality will welcome delegates.

With manufacturers gearing up for the peak retail season of Christmas, one should expect further y/y increases in coming months as inventories at both manufacturing and retail level are fairly low. The 115% y/y increase in the maize harvest should see a surge in grain mill product output, which only increased by 1.3% in August compared with May, when harvesting started, compared with a 6.5% jump in other food products such as pickles over the same period.