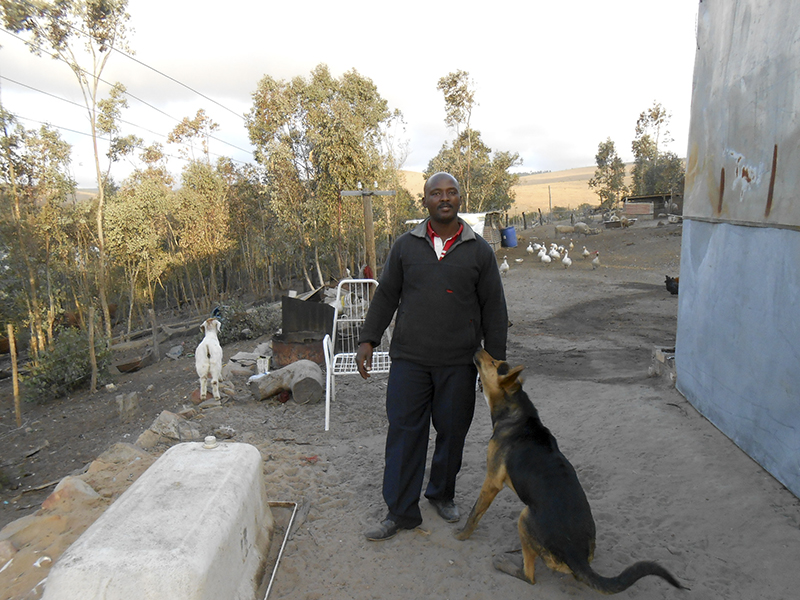 Mashiyane Skele looks after the livestock of an owner who lives in Grahamstown. Photos: Sue Maclennan

Access to Milner Dam for members of the public was never restricted, Makana Parks Manager Jeff Budaza says. He was responding to questions from Grocott’s Mail about concerns that the Slaaikraal commonage and dam, a popular recreational area, had been annexed or acquired by a group of stock owners.

Outdoor enthusiasts complained on social media that they’d been unable to access the area because two padlocked gates stood in their way.

On a recent visit to the dam, Grocott’s Mail met Mashiyani Skele, who lives in a prefabricated structure next to the ruins of the old brick house above Milner Dam. At the time, he was looking after around 40 goats, a couple of pigs, a flock of geese and around two dozen cows. He referred Grocott’s Mail’s questions to their owner.

“There are five of us on that farm,” said the owner, Dolly Caba, who lives in Grahamstown. “We don’t own it, we just keep our things there. The farm belongs to the municipality. If you want to know anything you must ask them!”

Grocott’s Mail did, and Budaza confirmed that one of his staff had facilitated the use of the land and the dam by some Grahamstown families.

This wasn’t unusual, he said. “When I arrived in this department I inherited a system whereby it was Parks that allocated commonage land – for grazing, or warehouses etc.”

During his predecessor’s time, the portfolio had been divided into Agriculture and Environment.

“I’m the one who raised the problem,” Budaza said. “I’m not the one who is supposed to be allocating land. I am not in a position to give someone even an inch of land that belongs to Makana Municipality.”

He said land had routinely been allocated to various entities under the previous dispensation. A motion was due to be tabled at the next Council meeting (25 October) to have land allocation removed from Parks and taken to the Local Economic Directorate.

The Slaaikraal farm commonage is 400ha, Budaza said, and six emerging farmers are there as tenants.

According to the current system, whoever wants a space on one of Makana’s farms approaches the office and that person gets allocated space after some discussion with the official. In future, they will be referred to LED and put on a waiting list.

“Makana doesn’t tell the farmers what project they must undertake: instead they come with their own ideas and ours is to assist them accordingly,” Budaza said.
Six cattle, 34 goats, 14 sheep, eight pigs and 15 ducks were currently being kept on the SLaaikraal commonage.

“The access to Milner Dam was never closed,” Budaza said, “but members of the public complained at the office that some people leave the gate open. We decided to lock the gate so that whoever wants to visit the dam can book the keys out with Parks.

“When people still complained, we decided not to lock the gate but just keep it closed.”

Grocott’s Mail’s visit by mountain bike was before this interview, and it had been necessary to lift bicycles over locked gates then.

Following concerns that livestock was in direct contact with the dam, Grocott’s Mail asked Infrastructure and Technical Services Director Dali Mlenzana how important the dam might be during a prolonged drought.
A recent investigation of dams in Makana by engineers was not on the basis that the dam/s might form part of an overall water supply strategy, Mlenzana said.

“Five-yearly dam safety evaluations are conducted in terms of Regulation 35 to identify actual and potential shortcomings. Protection and management is then based on the dam safety rules for each dam and recommendations of the assessment by the Engineer.”

In a recent Council meeting, the DA’s Brian Fargher tabled questions about the use of the dam, including the criteria for animals to be kept within the catchment area of the Grahamstown water source.