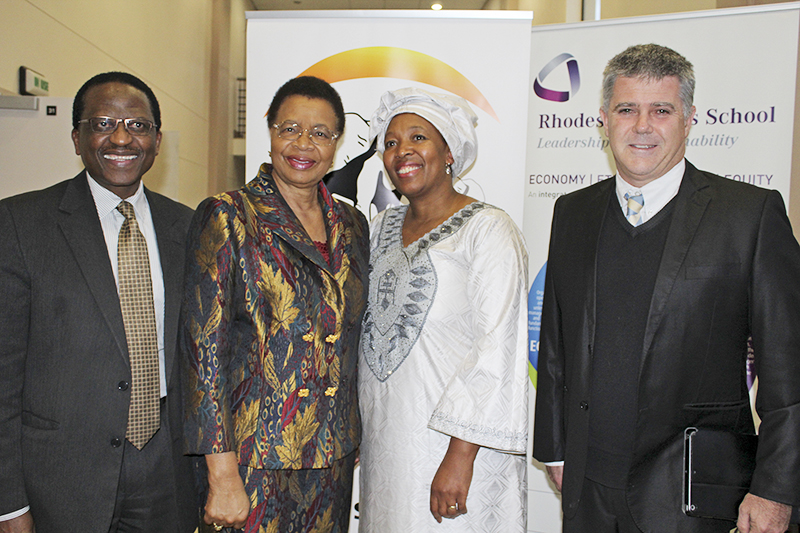 “I don’t lecture; I hold conversations,” was Graca Machel’s opening disclaimer at her talk in Grahamstown on Thursday night. Her conversation on this occasion dealt with what African identity looks like in both a business and social context under the topic, ‘Rebooting a value-based society’.

Machel delivered the Thabo Makgoba Development Trust annual lecture hosted by the Rhodes University Business School crowd to a large audience of Rhodes University students, schoolchildren and members of the public. The School’s Director Professor Owen Skae introduced her, along with an extensive list of accolades.

The former first lady believes African identity identity is a ‘collective’ one. The essence of Ubuntu, she said, means, “I do not exist without you.” She had reached this understanding through working with large groups of people, she said, and jokingly confessed, “Don’t be impressed: I don’t do things myself, I get other people to do things. I believe in a network of people to get things done.”

As a humanitarian, a politician, and the current Chancellor at the University of Cape Town, her experiences of social injustice has built her social activism profile. This has gained her a place on the Africa Progress Panel, a group of 10 distinguished individuals who advocate at the highest levels for equitable and sustainable development in Africa.

Machel said throughout the offices she had held, she had learned that family, school, and tertiary institutions help create our value systems. The Freedom Charter, she believes, lays the foundation for a democratic society and improving the quality of life for all.

“How many cases do we hear of women and children being assaulted? Every three days a child is killed from abuse and neglect,” Machel said. “Every eight hours a woman dies at the hands of her partner.”

She asked where our value systems had deviated from the ideals of the Freedom Charter. “We hear these things and we carry on with our lives as if it has nothing to do with us,” she said.

She said HIV in South Africa had robbed a generation of children of their parents, distorting value systems and destabilising the very foundation of family. “This leaves us with generations that have no sense of what’s right and what’s wrong,” said Machel, “We have gained a tolerance for violence, corruption and unconstitutional behaviours.”

Machel went on to discuss the #FeesMustFall protests, pointing out that the youth currently at tertiary level are the ones most affected by parents who were lost to HIV. She encouraged protesting for the free education that society wants – but said students should be progressive in their protests.

“If you burn when you’re angry, it plays against yourself,” she said, reminding her largely student audience of their brothers and sisters who would come after them.

She put the challenge to students at tertiary institutions to come up with a way to combat injustice and build meaningful movements against it.

He closing advice, “Dream big and consider what kind of South Africa you want to live in,” was met with appreciative clicks and “Amens” from the mesmerised crowd.