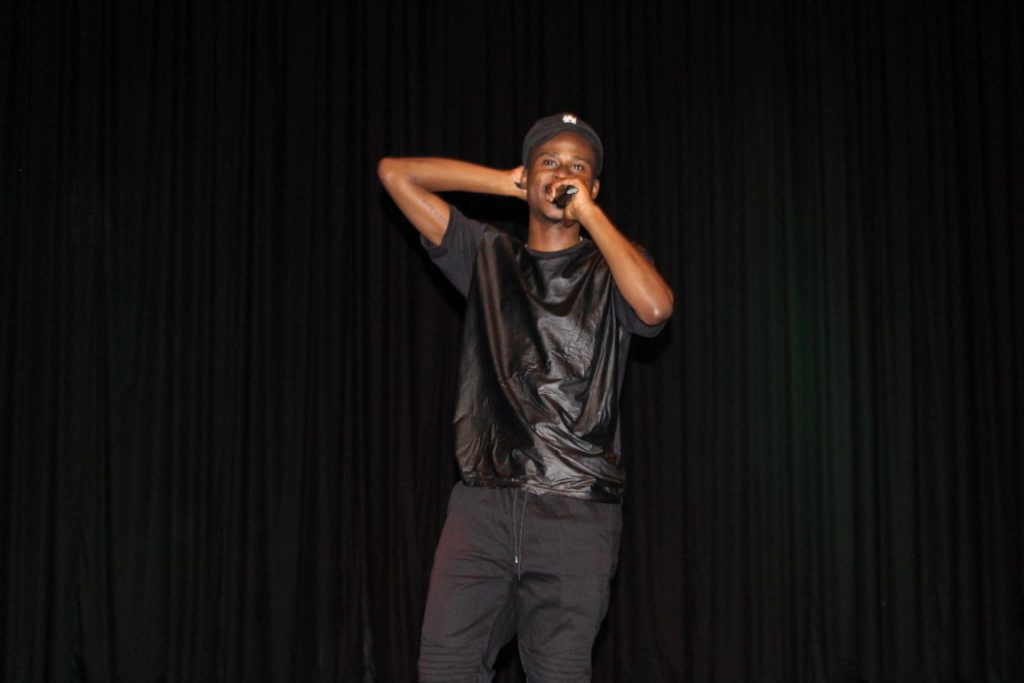 You wouldn’t think of a rapper as shy – but Rhodes student Paige tells Sinethemba Witi it’s his way with words and music that’s allowed him to come out of his shell.

On Friday 30 September, as part of promoting his mixtape, Confession Booth, Ndzingeko Mabuza AKA Paige hosted a hip-hop show at the Rhodes Theatre. Attendance wasn’t as good as he’d anticipated, but he felt he’d got an opportunity to showcase his talent.

“I’m so happy that everything worked out. Everything I said should happen, happened. That’s why I feel like it was a success,” said Paige.

Born and raised in Mfabatfu, Manzini in Swaziland, the 21-year-old says he grew up listening to gospel music. He also says that he was inspired by the song Fighting Temptations by American Christian rapper T-bone.

Released on 6 September the album, which consists of 15 tracks, is his second project. He says in his first mixtape, ‘City of God’  he was still finding his feet in the music scene but he expresses himself more in this newly released offering. The title was inspired by how he uses music as a confession booth: “Music for me is like meditating or praying: I use it to express myself,” says Paige.

The second-year Social Sciences student at Rhodes University describes himself as an introvert, something he always struggled with growing up.

“In primary school my schoolmates often teased me – until I got into a singing battle with them, which left them astounded.”

Growing up as a shy person, rap gave him a platform to express himself. For inspiration, he started listening to prominent artists like 2Pac, Lil Wayne and Nas.

The upcoming rapper says he started rapping at 11 and also learnt how to play the piano. He wrote his first rap song at 13. He  found comfort in the genre: “Rap music is an art where you can say literally anything you want to say without limitations. RnB  talks about love – but rap is more expressive.”

He is motivated by what is happening around the world and writes songs about it.

“Just like singing, for me playing the piano is an escape from reality. It’s soothing – until you are done and realise you are back in the real world. It is a wonderful thing because sometimes it’s good to forget about things for a while,” says Paige. He says that when you going through a rough patch in life music can help you heal. The rapper also plays base and says he wants to learn how to play drums next year. He listens to Gospel, jazz, Blues, and Soul.

Rap as an influence

Paige hopes to influence people positively through his music. He does not like that people associate rap music with alcohol and drugs. “We live in a world where we wish to be that person (artists): it is sad when kids are listening to our music – they pick up all the negative things,” said Paige.

He says when other rappers sing about drugs, kids think it is a cool thing to do.

“Doing drugs is an act of picking up the wrong things, not being mature enough to understand the fuller picture,” says Paige.

Paige’s biggest challenge is balancing music and his studies. He says he wants to do music fulltime but his family expects him to complete his studies first because they have invested so much in him. Highly optimistic, he sees himself getting a Grammy in the next 10 years.

In 2016, after being voted for by hip-hop fans Paige won the competition, to open for and share the stage with rapper Toya Delazy during her performance at Prime in Grahamstown. This will go down as one of his career highlights, he says.