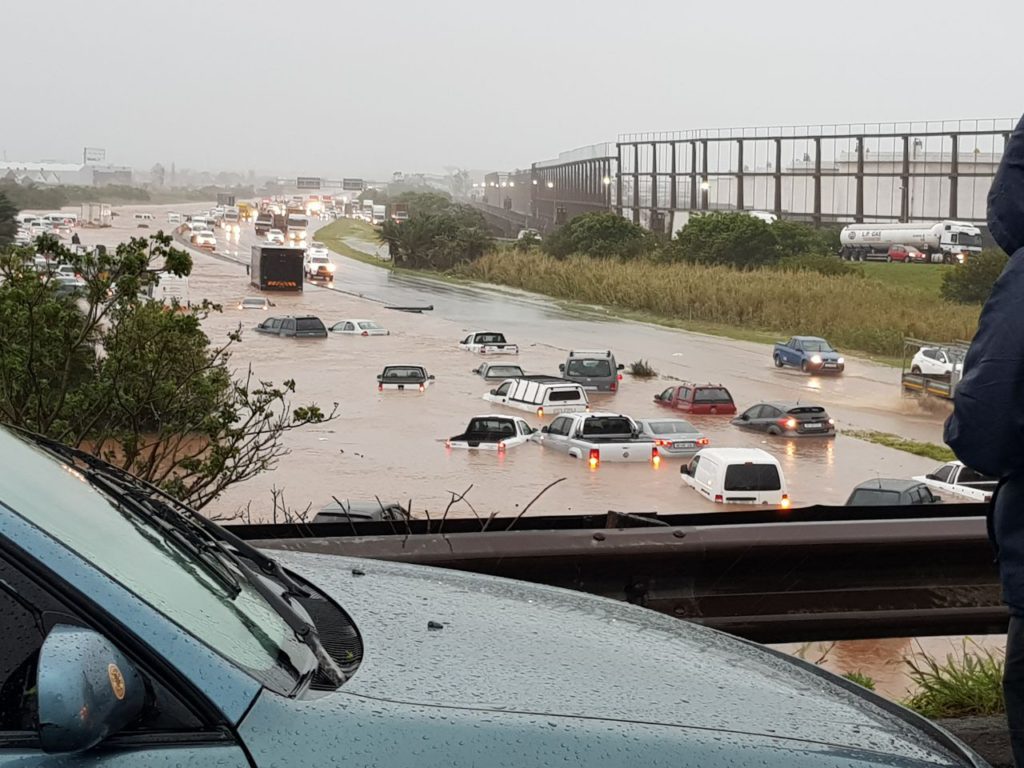 Cars submerged during flash flooding on the M4 opposite Prospecton south of Durban this morning. Photo: Janine May

As the skies clear in Grahamstown after nearly three days of soaking rain, SA Weather continues to post warnings of heavy rain for areas across the Kei River in the Eastern Cape, from Butterworth eastwards.

Grocott’s Mail’s rain-tracking team had recorded up to 59mm in central Grahamstown by lunchtime yesterday. At Rivendell, west of Grahamstown, watercourses were running after a long period of dryness.

As Joburg reels from yesterday afternoon’s storms, IOL reports that flash flooding in Durban last night and this morning left areas of the South Coast without power. A photograph sent to Grocott’s Mail shows cars on the M4 south, opposite the oil refinery at Prospecton, almost completely submerged.

The KwaZulu-Natal Department of Cooperative Governance and Traditional Affairs (Cogta) is coordinating relief efforts amid the worst storm that hit many parts of the province.

The storm, which hit the province this morning, caused major damage to hospitals, factories, homes and other key infrastructure.

According to a Cogta report, the storm caused power outages in various areas, with two deaths reported. Many residential areas, including businesses, especially in eThekwini Metro, reported flash flooding.

Most areas in eThekwini were reported to be affected by strong winds with heavy downpours, resulting in the falling of trees and some housing infrastructure in areas of Umlazi, Amanzimtoti and Montclair.

“Other major incidents have been reported in Nquthu Local Municipality in Mbewunye, where an eight-year-old girl was struck by lightning, and in KwaMngxangala, where a 46-year-old man drowned while trying to cross an overflowing river.

Acting MEC for Cogta, Weziwe Thusi, has activated and dispatched all disaster management teams to respond to the situation on the ground.

“We are also urging motorists to avoid all but necessary travel, as some roads such as the N2 freeway has been closed in both directions at Amanzimtoti due to severe flooding caused by a massive storm that hit this area this morning. Motorists are requested to tune into weather reports as they plan their journeys,” Thusi said.

KwaZulu-Natal Metrorail services had been suspended due to bad weather, said the Passenger Rail Agency of South Africa (PRASA). “The service suspension comes as a result of the safety concerns related to the strong possibility of flooding of the rail lines,” PRASA said in a statement today..

The department further warned that the extreme levels of rainfall experienced today will be followed by a cold front, which is expected to reach the province by the weekend.

Grahamstown should be dry and a bit warmer tomorrow according to SA Weather, with sunshine bringing a 23C high. Things cool down again on Thursday with 3mm rain predicted, and the prediction so far is for a warmer and drier weekend. Saturday’s temperature is forecast at 28C.