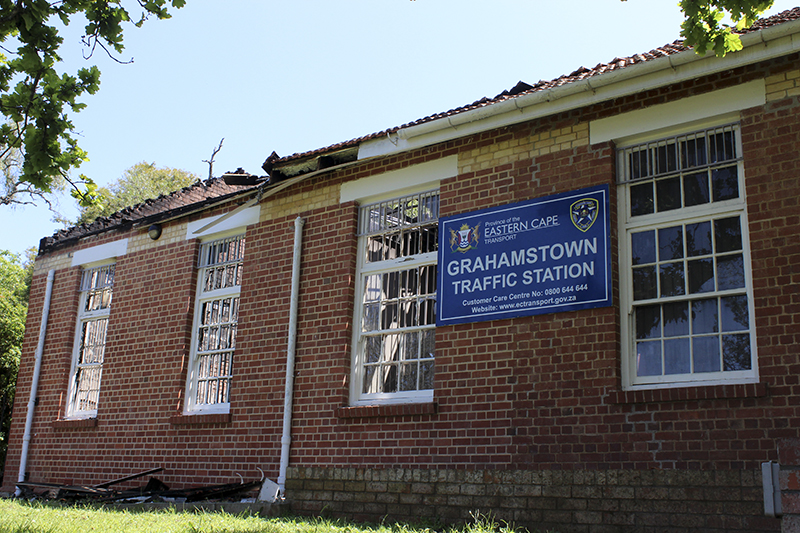 The Provincial Traffic Department office in Huntly Street, Grahamstown, was gutted in a fire in the early hours of Saturday 30 September and seven fire arms we later reported missing. Photo: Sue Maclennan

Grahamstown Police opened a case of arson and house breaking after the Provincial Traffic Department office was gutted by fire in the early hours of Saturday.

Makana Fire Services records indicate a call was made at 2.15am.

“The team arrived at 2.16am,” said commanding officer on the following shift, Robert Brooks. “When they arrived, the right-hand-side of the building had collapsed. The team worked until 3.20am to contain the fire.”

Platoon Commander Julia Someketa was the officer in charge at the scene. The Makana Fire Services team managed to save the right-hand-side of the building, which contained 13 rooms including offices, a lecture room, a server room, a weapon room and a duty room. Among the destruction were air conditioners, ceilings, doors, windows and cabinets.

“The fire department was called to the scene but when they arrived… it is alleged that the fire was at an advanced stage,” Tonjeni said. “Half of the building was severely damaged.”

On further inspection, the traffic chief found seven firearms missing from the safe. “As a result, another case of house breaking was added to the cases under investigation,” Tonjeni said.

Experts from ballistics and Crime Scene Investigators were called to the scene and combed the area for clues.

No one had been arrested yet, Tonjeni said.