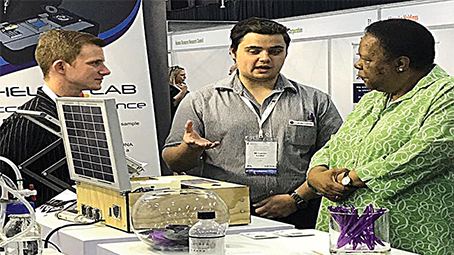 The winners of the Innovation Bridge Award, Charles Faul and Lucas Lotter are seen here with Minister of Science and Technology Naledi Pandor. Photo: Steven Lang

Two Rhodes University Masters students won the prize for the best prototype at the Innovation Bridge awards held in Midrand recently. The event sponsored by the Department of Science and Technology aims to create a space where young innovators and start-ups can meet with potential investors and other stakeholders who might be interested in helping young entrepreneurs turn good ideas into marketable products.

More than 700 innovators, academics, government officials and potential investors gathered at Gallagher Convention Centre to assess the opportunities and challenges for innovation in South Africa.

Lucas Lotter and Charles Faul both work at the Rhodes University Biotechnology Innovation Centre, RUBIC, in Grahamstown where they are doing their post-graduate studies. The Innovation Bridge takes place every two years so Lotter and Faul decided to take the opportunity and sign up. They attended a training event for technology transfer organised by the Innovation Bridge where they could present their idea to people who could help with their prototype.

Their skillsets complement each other as Lotter, CEO of Akili Labs, has a background in stem-cell technology while Faul has the technical skills to build the various components that make up the Field Labs

Together they built a prototype of a field laboratory designed to do a range of diagnostic tests in remote areas. They found that often when patients in rural areas need to be tested for HIV, malaria, TB or other preventable diseases, they would often have to wait days or even weeks for the results. This is not an efficient way of doing things because if such a disease is not treated as soon as possible it can lead to the patient becoming even sicker, or in extreme cases, even dying.

Their Field Lab is designed to substantially reduce the time taken for patient diagnosis in rural areas. Their aim was not only to make the diagnosis much quicker but also to slash the costs of each test by sourcing more cost effective components. Lotter said that the real challenge was compressing so many components into a small portable Field Lab.

Each Field Lab kit has a range of different components that are purpose-built according to the clients’ needs. Lotter expects most of the kits to be used for diagnostic purposes but he says they could also be used as part of a research project.

Lotter was naturally pleased with the outcome of the Innovation Bridge event and he explained that besides doing all the work and testing for their own project he and Faul made significant contributions to other Rhodes innovations. He was responsible for all the graphic designs on the Rhodes stands while Faul helped build all the prototypes.

The prototype they took to the Innovation Bridge event was made of plywood, but the productions models will utilise the strength of resin. Their aim is to make a mobile lab built into a casing that can be dropped off the back of a truck and still be fully functional.