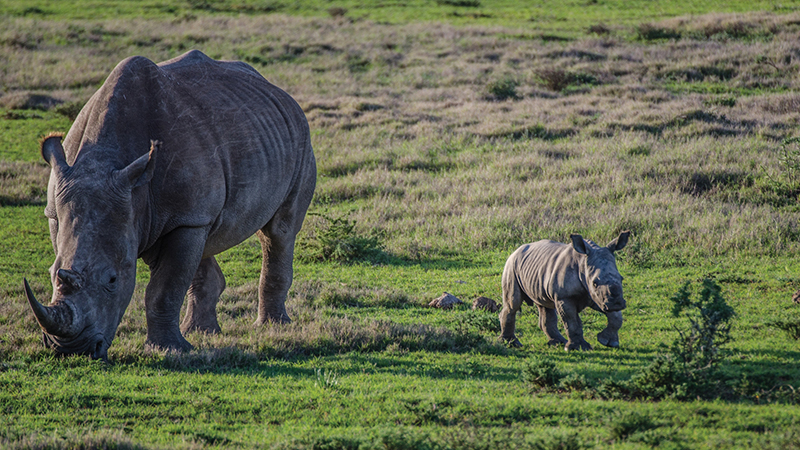 Just in time for an extra special World Rhino Day on 22 September, a precious new rhino calf was born in the Eastern Cape, despite very difficult circumstances. The heart-warming event was made extra special, as it was witnessed by the special rhino protection team at Amakhala Game Reserve (AGR), who provide the on-the-ground protection for our rhinos to live and thrive.

Every rhino is precious. Just 5 500 critically endangered African Black Rhino are left and only 20 000 Southern White Rhino remain. These few rhinos are under constant threat as poachers backed by professional crime syndicates slaughter a thousand rhinos every year. This drastically reduces the breeding population of rhino year after year, a tragedy for these ancient animals that breed very slowly, with a long gestation period of 450 days.

While every rhino matters in the quest to save this iconic species, there is something special about the Eastern Cape’s latest rhino calf, whose birth was celebrated across the world.

Born on 2 September 2017 and weighing approximately 45kg, the calf is named ‘Schofe’, after the well-known  presenter of This Morning Show – a British daytime television programme that is broadcast on ITV –Phillip Schofield, aka ‘Schofe’. Phillip and his team visited Amakhala in November 2016, as part of their South African adventure. They were privileged to witness the moment when the team discovered the wonderful news that rhino mom Themba was six months pregnant!

At the time, Phillip said, “It was surprisingly emotional being so close to a sleeping rhino and the news of her pregnancy gives us hope for their future.” He said it would be great if Themba had her baby on World Rhino Day. Born just days before World Rhino Day, the rhino calf came very close and was consequently named Schofe.

Both Schofe and Themba are doing well. They have already moved along several kilometres from the birthing place and, unusually for such a young calf, Schofe has already been introduced to other rhino. Schofe will stay with his mom for three years.

Themba, who is six years old, was born on Amakhala Game Reserve in 2011. Themba’s mother, Nomvula, still lives on the Reserve and hailed from Hluhluwe in northern KwaZulu-Natal. Her father was Chipembere or “Chippy”, who was sadly killed by pachers in 2010 and whose death resulted in the establishment of the Chipembere Rhino Foundation (CRF), an EC based NGO.

Themba’s pregnancy and Schofe’s birth is an amazing story. Themba fell very ill at the end of 2016 and was losing weight. Tests were done and she was darted four times to administer supportive treatment. Subsequently, Dr William Fowlds, Amakhala’s renowned wildlife vet, and his team supported her while she slowly recovered. After such a long illness, Themba amazingly conceived in May.

“Themba was very ill. It’s the first time I have ever witnessed a rhino vomiting in my professional career as a wildlife veterinarian. Because of this she lost a lot of weight and we were worried that she could have died of secondary pneumonia” said Fowlds. “The two factors which I believe made the difference to Themba’s turnaround was the support from individuals and companies like Medivet and Karl Stors who loaned medical equipment and secondly her rhino companion Lindiwe, who stayed by her side throughout her recovery. Special moments that I am sure helped her cope with the stress of being so sick.”

Schofe’s birth is an emotional celebration on Amakhala, which was built on family heritage. It is a celebration of Themba’s recovery and the birth of Chippy’s grandson, the beginning of a second generation of rhinos born in the protective custody of Amakhala’srhino protection team. This team, including Eric Dickson and Ella, the first cold scent tracking dog for the Eastern Cape, were also richly rewarded for their dedication with the rare opportunity to witness this special birth. “Very few people in the world get to see a rhino giving birth. It is something very special to witness,” remarked Eric .

Ella joined the Amakhala team recently thanks to a partnership between Wilderness Foundation Africa, Medivet Saving the Rhino (UK) and the Chipembere Rhino Foundation, providing a crucial layer of protection around these precious rhinos.

“It is a special privilege to see the rhino that were born here having babies. It is a great reward for the security, protection and care our team provides these iconic creatures daily. It is also a great motivation for the ground protection team, who face long nights, cold days and dangerous poachers to ensure these rhinos can live and breed under their protection,” said Mark Palmer, manager of Amakhala Game Reserve. “We are delighted to welcome Schofe into our family and believe his arrival will continue to inspire more people to become involved in the protection of the few rhino we have left.”