Look out! And enjoy the view… 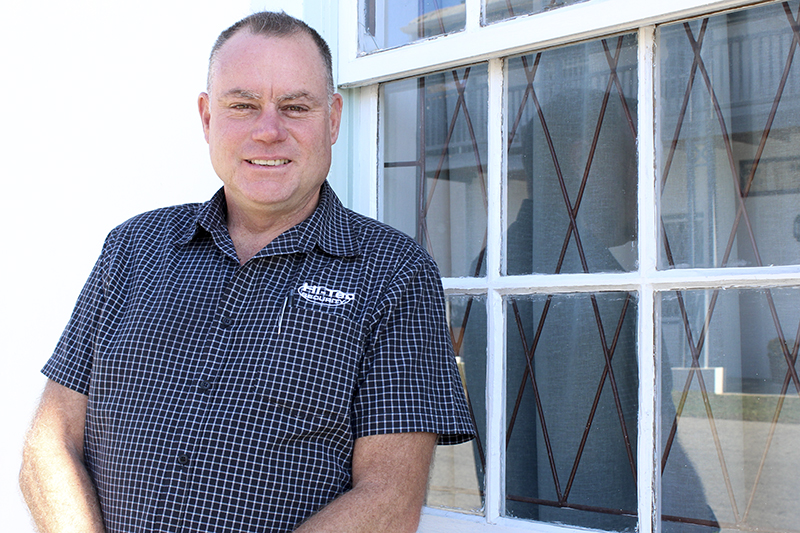 Many old Grahamstown houses have sash windows and owners like to retain the wide-open feel these bring. There are ways to keep your house looking authentic, while keeping it secure, says Hi-Tec Manager Andre Wille. Photos: Sue Maclennan

Grahamstown’s Settler cottages are cosy, with sash windows and stable doors part of their charm. You can retain that old-world openness yet keep your home secure, says Hi-Tec Manager Andre Wille.

Burglary is an opportunistic crime and there is a lot you can do to avoid it, says Hi-Tec Manager Andre Wille. How you secure your home makes every difference and while older houses have their challenges, the principles are the same.

Physical barriers are your first line of defence and the further away you can keep potential intruders from your home, the better. It starts with a sound perimeter.

While a wall is great for privacy, it also provides an opportunity for an intruder to move around the yard unobserved.

Spikes on top of a wall may look impressive, but in fact they can easily be flattened, or an intruder can simply cover them with a thick mat.

Palisade fencing is Wille’s choice. It usually comes riveted and to turn it into a proper deterrent, you should weld the joints instead. “It’s messy, but it’s effective.”

“Often when you’re at home, the alarm is off. But if you have an electric fence, that usually stays on. Because the electric fence is connected to the alarm system, it acts as a double deterrent.”

A range of different kinds of mounting brackets mean an electric fence doesn’t have to look harsh and unwelcoming.

Sometimes the weakest point in the perimeter is the main access gate.
“The height of the horizontal support is very important,” says Wille.

Many old Grahamstown houses have sash windows and owners like to retain the wide-open feel these bring.

If your windows open directly on to the street, your aim is still to keep people as far as possible away from them. Spanish bars, bolted into steel frames, or walls, are a good option.

Some Grahamstown Settler cottages feature strong bars inside the window, bolted into the walls. That way, a historic house retains its character, the sash windows rather than bars greeting the street. “What you definitely don’t want are the burglar guards made to match the size of the panes in cottage style windows. An adult can get through that size bars without breaking them.”

Guards screwed into wooden frames are very easy to push out. Likewise, self-tap screws on to metal frames are easy to break.

“They’re only a couple of millimetres long and you can hit them with the palm of your hand.”
The solution is spot-welding. “That makes them almost impenetrable.”

Don’t think that an upstairs window is safe because of its height. “You’d be amazed what people can climb up to,” Wille says.

Safety is at least as important as security, and Grahamstown’s older houses, while charming and full of character, can also be a higher risk when it comes to fire.

“If you install bolted-in bars, you need to have one or two that are hinged, with padlocks, with the key in a place you can easily find in case of a fire.”

Door-gates are a good idea and often these are installed to be locked in the middle with a barrel and padlock; however, unless they’re secured at the bottom and top as well, they can be bent upwards or downwards

A padlock is the weakest point of a security installation, and a circular Abus-type is better than a standard U-shaped one.

Beyond the gates and bars
Lifestyle and behaviour influence your home’s security. While many Grahamstown people have extended family or staff who are there during the day, students usually don’t. Houses that are vacant during the day are vulnerable to being broken into, says Wille.

But that’s not the only reason student accommodation is often targeted by thieves.

“It’s very noticeable that student communities tend not to be proactive about security,” Wille says. “For example, they’ll leave a laptop on their desk near a window.”

The fact that among any group of students there are likely to be at least as many electronic devices as students is another factor making them a target.

“In a digs, every student will have a laptop and an iPhone and nice designer clothing,” Wille said. “Thieves know that very well.”

“I’ve been phoned by out of town parents and asked to go and check on a student house,” WIlle said. “When you get there, you’ll find the keys in the door, and the kids passed out still from the night before. There’s quite a lot of obvious carelessness.”

“They don’t have to be vicious – but just the fact that they make a noise is a deterrent.”

Of course, security alone is no reason to get a pet and you definitely need to meet the standards of being a suitable owner before you even consider adopting an animal for life. Contact the SPCA for advice about what that entails.