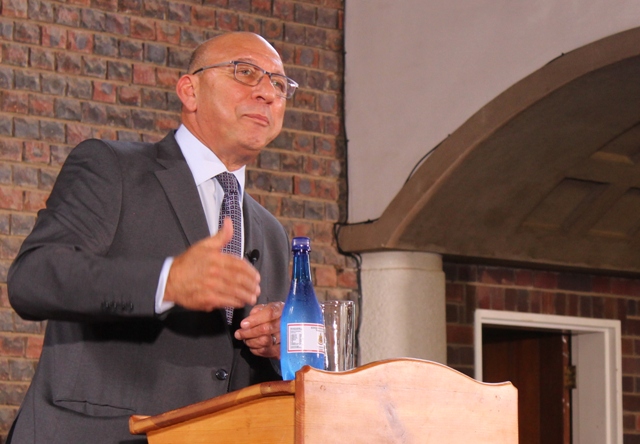 Former Cabinet Minister Trevor Manuel believes citizens have set the bar too low for public representatives and firmly believes that South Africa’s Constitution is the key to getting the country out of the mess it’s in. Manuel was the guest speaker at Kingswood College’s Neil Aggett Memorial Lecture – an annual event to commemorate the former pupil who died in detention in 1982 after a decade of anti-apartheid activism as a young adult.

The lecture, and an award also presented annually, celebrate the practice of service above self, and aim to foster a culture of social responsibility among pupils in the school. The venue was the school’s chapel, which was packed.

“We have allowed the bar to be that low,” Manuel said in a press conference after the event. “We don’t require more of our councillors and MPs – we don’t live out the values of our Constitution.”

People in Grahamstown should be asking tough questions of MPs, MPLs and councillors. In a direct challenge to passive citizenship, he said, “When the President violated the Constitution last year, here in Grahamstown you should have said to your public representatives, ‘So what are you going to do about it?’”

Manuel, the country’s longest serving finance minister, said the problem was brought into sharp relief over the secret ballot Constitutional Court debacle last month. “MPs are supposed to serve the nation, not a party,” Manuel said.

The National Development Plan was premised on active citizenship, Manuel said. “It’s ‘Amandla ngaWethu – not amandla ngaPresident!’,” he said. “You have to sharpen those contradictions and bring them out.”

He said the NDP was a viable blueprint for South Africa – what was lacking was proper co-ordination between arms of government.

On the subject of leadership, he said, “Leadership isn’t what we wish to have: it’s what we have. It’s an unbreakable link created by the Constitution – they are democratically elected representatives.”

The only option, he said, was to turn them into the leaders people want, by holding them to account.

“The biggest tragedy of this magnificent document [the Constitution]is that we don’t read it and engage with it. We don’t know it and we don’t teach it,” Manuel said during his address, which was a powerful call to action.

“We don’t live by the Constitution and the tone from the top doesn’t suggest adherence to this concept.”

Neil Aggett had been the threat of a good example, Manuel said. Describing Aggett’s frugal life, dedicated to being a trade unionist by day and a doctor by night, he said, “The only threat he presented was that he was a good example who would show up those with a different kind of agenda.”

Speaking of a ‘pedagogy of hope’, Manuel said the Constitution was about hope. In his call to action, he said Neil Aggett was 17 when he began his journey towards seeking justice for others.

“First, recognise injustice,” Manuel said. “Then honour those who have made sacrifices.

“Finally, make a commitment to change.”

Kingswood College head girl Tina Madasa received the Neil Aggett Award, after a citation that told of an extraordinary range of community oriented activities and acts she had been involved in over a number of years at the school.