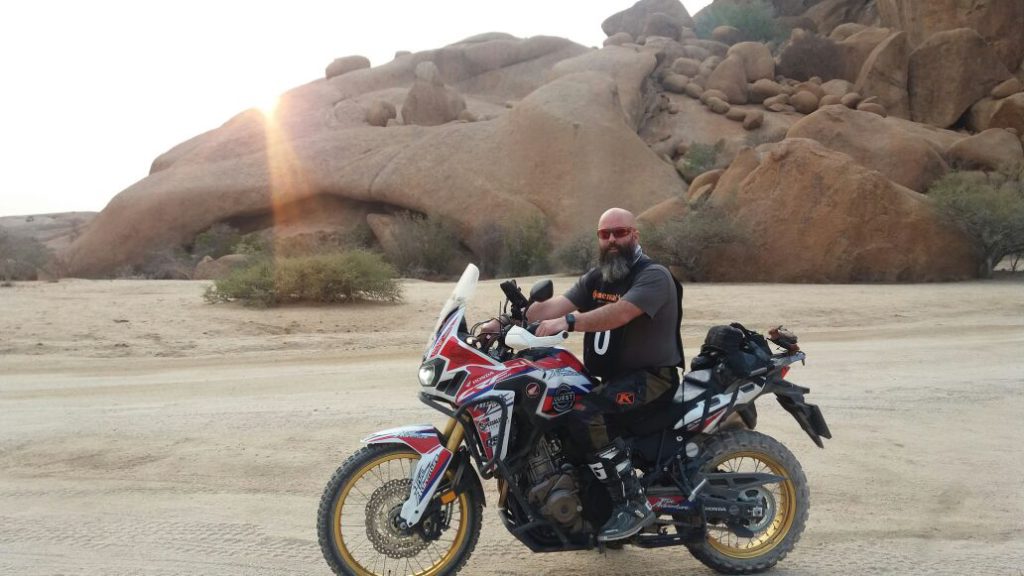 Glenn Koch and Quest teammate, Grant Pentalow from Johannesburg won the Quest Spirit Award at the end of the 2017 Honda’s Quest-True Adventure. According to Jaco Kirsten, Media Manager for Specialised Adventures, “they were always in good spirits, no matter how tough the conditions, and remained loyal and supportive teammates right to the very end”.

Koch, owner of Wesson’s Grahamstown, said he found out about the Quest on social media and applied and before he knew it he was one of the top 20 selected to take part, in what he described as an “epic adventure run like a Swiss watch. A truly life changing experience”.

“Even though the heat was a problem (max 50 degrees) and the tough conditions, it was extremely enjoyable,” said Koch, adding that fatigue and extreme terrain made it a challenge “but the stark solitude and beauty of the area made it a fantastic experience”.

Koch said the Honda CRF1000 “was a dream to ride and took everything we threw at it in its stride. We rode most days from sun rise to sun set in varying conditions. The worst being the approach to Van Zyles camp (70km in 10 hours) and Van Zyles proper that is 4.2km long that took us five and a half hours”.

Honda opted for Quest as a dedicated marketing platform to illustrate the ruggedness, refinement and market leading capabilities of the Africa Twin.

Adventure motorcyclists submitted entry applications at their nearest Honda dealerships in South Africa and Namibia. From over 900 entries submitted, 40 semi-finalists were chosen to attend a Boot Camp in Ceres, or selection phase. Honda’s strategic partner in Quest, Specialised Adventures, planned and executed the extreme competition.

Riding skill was only one part of the competition, as participants were also tested about their knowledge of the areas they travelled through, their ability to work in a team, their mechanical skills, as well as their psychological strength.

At the end of the Boot Camp 20 finalists were selected, including Koch. They were flown to Namibia at the beginning of September to participate in the Quest-True Adventure on 20 specially prepared Honda Africa Twin motorcycles. The event started and finished in Windhoek, involving over 2500 km of seriously challenging terrain through the Kaokoland and Damaraland, all in the space of 12 days. The participants competed in 10 teams of two riders each.

Participants were evaluated on skills such as their mechanical maintenance and recovery abilities; as well as how they coped with challenges such as observation, traversing challenging terrain, endurance riding, navigational exercises and tests designed to test their ability to improvise and adapt to adversity.

Twelve days after leaving Windhoek, the Honda Quest convoy finally arrived back at their starting point, tired, happy, content and richer for the experience.

Kirsten said Honda Quest did not aim to pick just the most skilled riders, but instead wanted the most versatile team. Honda wanted people who showed a keen sense of adventure and who were curious about their surroundings; as well as those who could get along with fellow competitors and could contribute to team spirit.

In fact, only when the team’s arrived back home on Sunday did they learn that Koch’s teammate Pentalow had ridden the last three days with a broken collar bone. “He has my greatest respect with his never give up attitude,” said Koch.

The last night dawned with a problem for the organisers in that they had a five-way tie. Contrary to the norm, the 10 teams had banded together and were working as one. “Their only choice was to give us a written test to break the stalemate,” said Koch. The winning team comprised Charl Potgieter from Pretoria and Hennie van Heerden from Victoria-West. “They impressed everyone with their calm, yet enthusiastic approach, as well as the thorough way in which they approached the special tasks,” said Kirsten.

Both will now be brand ambassadors for the Honda CRF 1000 L Africa Twin. They also took ownership of the motorcycles on which they had competed.

“Namibia holds my adventure heart and I am humbled by its extreme landscape,” said Koch.

Previous ArticleAnd the lucky winner is…
Next Article Mini Motoring