Grahamstown’s water – from source to sewage 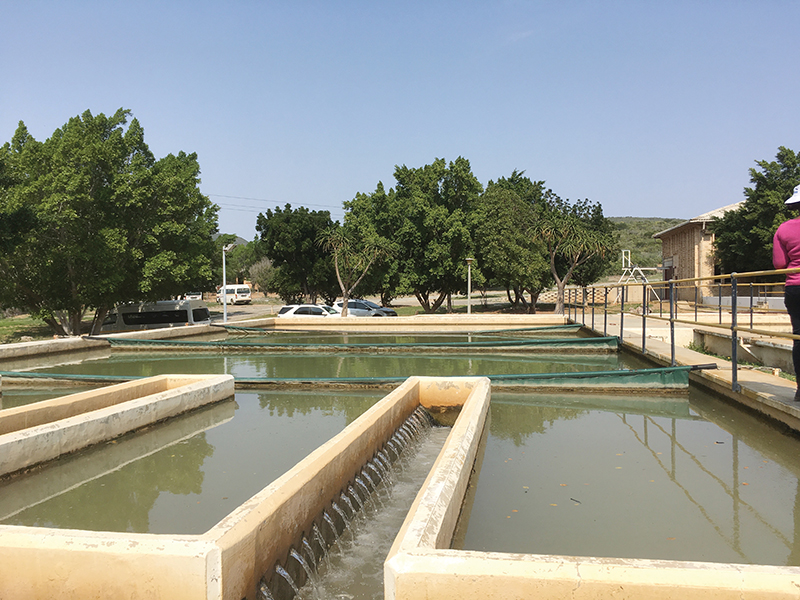 By Matthew Weaver and Taryn Pereira

Did you know that Grahamstown East has been experiencing water cuts every night for over a year? Housing developments in the East are on the back burner and residents are frustrated and confused as to why.

“When we flush our toilets, the water comes up, not down”! “The water in town tastes better than here in Joza”.

These were some of the concerns raised by community members who embarked on the Grahamstown Water Tour on 12 September.

The tour was coordinated by the Eastern Cape Water Caucus, The Upper Kowie Water Sanitation and Catchment Forum, Makana Local Municipality and Department of Water and Sanitation (DWS). The aim of the tour was to allow a group of Grahamstown citizens to observe the water supply system first hand, to be able to ask their burning questions and receive answers directly from the relevant officials, and to build better relationships between citizens, civil society and government departments. The tour was attended by about 40 people, including community development workers, local NPOs and NGOs, and representatives from Makana Municipality and DWS.

elville Dam. Martin Labuschagne (Project Engineer DWS) explained how water captured in the Lesotho highlands flows down the Orange River, into the Gariep Dam. From there some of it is transferred via tunnels, canals and rivers to the Sundays River to supply the citrus industry and Port Elizabeth and some via the Great Fish River to supply irrigation schemes and Grahamstown via the Glen Melville Dam. Martin explained that Fish River water has a high salinity and even though the water is treated to within national drinking water standards, it is still slightly saline.

The head foreman of the James Kleynhans Water Treatment Works Sixolile Mtonga explained how raw water is cleaned through a process of flocculation (separating out solid impurities), sand filtration and chlorination, after which it is pumped up to Botha’s Hill reservoir. The treatment works currently produces 10 megalitres (ML) a day, which is not enough to supply the 12ML demand of Grahamstown East. Ongoing upgrading of the works will increase that capacity to 20ML, however this is only estimated to be completed in 2019. we travelled on to the Botha’s Hill Reservoirs on the hills north-east of town. These are the main water storage reservoirs for the Eastern supply system. Peering into the depths of the reservoir, Ntombi Tshicilela (Makana’s Manager for Water and Sanitation) showed how, despite water gushing in, the level was gradually dropping, indicating that demand outweighs supply in the East. Water from Botha’s Hill gravitates to Mayfield and Tantyi Reservoirs, supplying Grahamstown East suburbs en route.

Community members had a rich discussion with the Makana and DWS officials about the main challenges facing the municipal supply system and what could be done about them. Vandalism and theft is a huge challenge. Telemetry devices used to remotely track the levels of reservoirs have repeatedly been stolen. Now reservoir levels must be monitored manually, delaying the detection and repair of major pipe bursts which results in the wastage of thousands of liters of clean water. The electric fence and standard fencing has also been stolen, leaving the reservoirs open to anyone wandering in. The metal covers to access the inside of the reservoirs have long since been stolen. Now replacement composite plastic covers have been installed in the hopes that they will be of little value to potential thieves.

Thabang Ngcozela and Aaron Ranayeke from the Eastern Cape Water Caucus emphasised that to get community buy-in of water management processes, the municipality must build relationships and engage in meaningful dialogue with community members, to identify problems and come up with solutions together. Tshicilela agreed, saying that we will never get anywhere if people view the relationship between the municipality and the community as “us and them”. north of Grahamstown East. Here Labuschagne explained the process of how waste water from our toilets, and drains gets cleaned before getting discharged back into streams and rivers. Sewage flows through grids and then an auger to remove solid rubbish (mostly litter and nappies). Sewage then enters ponds where it is partly broken down by anaerobic organisms (organisms surviving without oxygen), then in ponds with massive churning aerators, where oxygen loving organisms break down the rest. Next excess sludge is separated off to dry in sludge beds and the liquid is passed through a series of settling ponds where the remaining fine solid particles gradually settle out until clear water flows out into the receiving river. Mayfield is also in the process of upgrading to updated, more efficient technology which will increase its process capacity and enable the go-ahead of pending housing developments.

Water is a public good, and in South Africa we have some of the most progressive legislation in the world when it comes to emphasising the importance of participatory water governance. However, to participate meaningfully, ordinary citizens need to have a good understanding of our water supply system, and of the challenges in the system, as well as having access to forums where they can build relationships with officials to learn more, have their voices heard and hold officials to account. The Grahamstown water tour was a good example of the kinds of multi-stakeholder social learning forums that are so important for building capacity and relationships for better water governance.