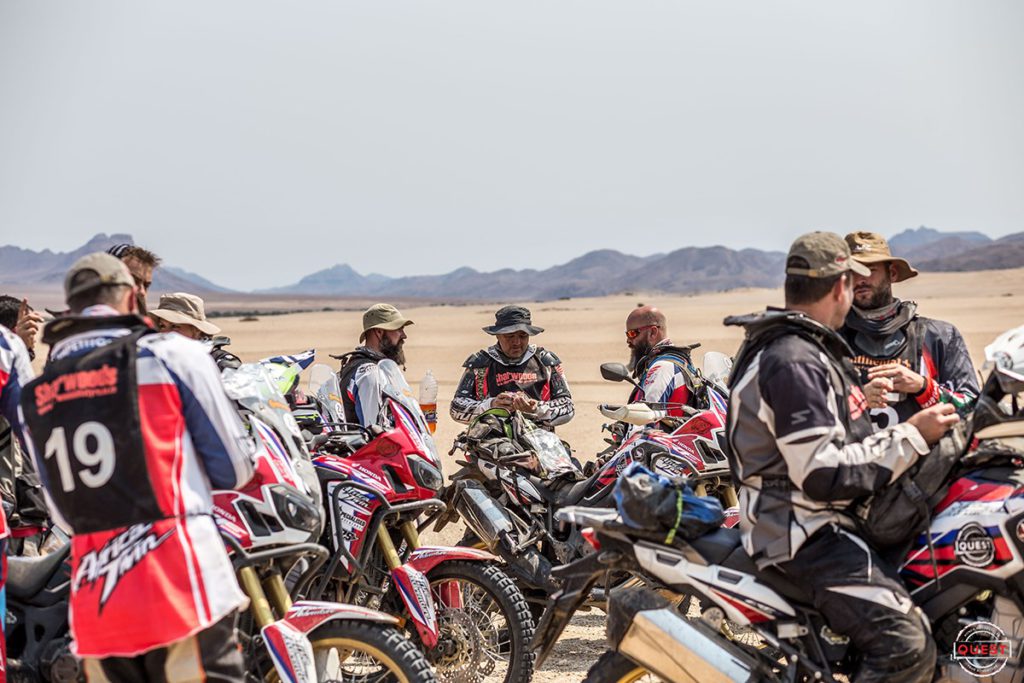 Glenn Kock, at the back with no cap, is one of 20 motorcyclists taking part in the Honda Quest 2017. Photo: Quickpic

Grahamstown’s Glenn Koch, owner of Wesson’s, is one of 20 participants of the Honda Quest 2017 which set off from the Namibian capital of Windhoek on 5 September, heading for the majestic Spitzkoppe, along a scenic 350km route of mostly gravel roads that gives everyone the opportunity to familiarize themselves with the Honda CRF 1000L Africa Twins for over 11 days and 2500km.

While the excitement was palpable before the start, there was also a sense of unease among the competitors, as no-one knew who their team mate would be. For some this could be a make or break situation, as the personality types in each of the ten two-person teams could play a huge role, determining the outcome of Honda Quest.

Koch was teamed up with Grant Pentelow.

This week’s Day Eight was a welcome rest day at the Puros campsite, with everyone being able to do various vehicle maintenance tasks, their washing and take the opportunity to interview the competitors.

When they started their engines on Day Nine, the excitement was palpable. For this day meant a trip down the Puros river canyon – and the possibility of encountering elephants.

After a thorough safety briefing the convoy of competitors set off led by a guide vehicle who scouted for a particular female elephant and her calf who were spotted heading down the canyon a day earlier. Elephants are protective of their young, creating a serious safety risk for those who inadvertently stumble into these magnificent animals.

After eight kilometres of hard sand riding and numerous river crossings the convoy stopped when a female elephant and her calf was spotted in the company of an aggressive male. In the interest of safety, the decision was made to turn back to Puros, from where the teams would ride south towards Palmwag. But first they had to retrace their steps back up the riverbed, now a churned up mass of deep, soft sand.

The off-road section of 107km caused havoc with tires, with the riders suffering no less than six punctures.

Finally, just before sunset, the Honda Quest group rode into the campsite at Palmwag, to be informed that an elephant had just walked through their campsite. The footprints were clearly visible and if that wasn’t enough, the group also noticed large lion footprints in and around the campsite.