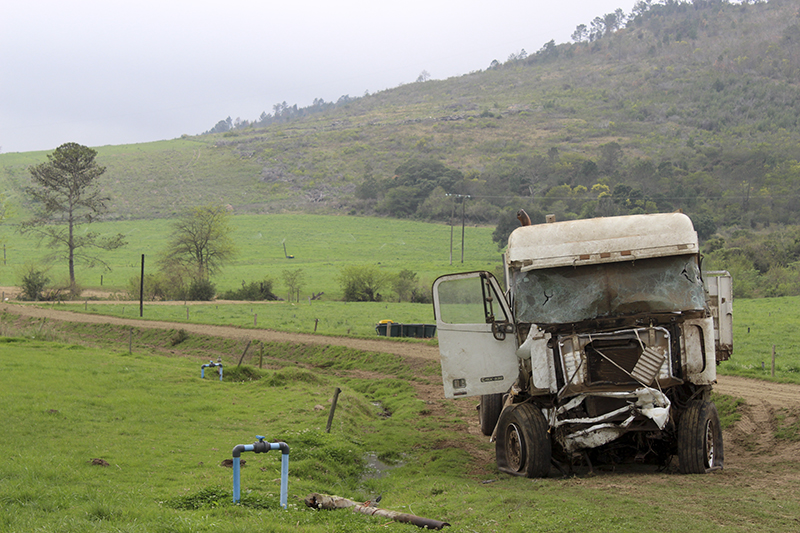 A 14-wheeler truck plunged down the embankment of the N2 south-east of Grahamstown early this morning Wednesday 13 September after hitting stray cattle. The driver was seriously injured and the cows were killed. Photo: Sue Maclennan

The driver of a 14-wheeler truck was injured after his vehicle hit stray cows on the N2 south-east of Grahamstown early Wednesday 13 September. Tyre marks and blood on the road a few hours later supported accounts that the truck, travelling south-west towards Port Elizabeth, hit the cows at the bottom of a long hill where the freeway crosses the Bloukrans River. It crashed over the Armco barrier and plunged down a 20-metre embankment, landing in the pasture of a local dairy farmer. Crushed foliage and smashed tree trunks mark its path down the steep slope.

Around 9.30am Wednesday morning, farmer Greg Vroom and his staff were assisting a small team from Port Elizabeth-based Car Towing Services to extract the truck and trailer from the thick mud next to the stream where it had landed. Vroom’s own cattle were secure on a different part of his Belmont Valley farm at the time of the incident.

The tow-truck operator, who was called out around 4am, said when they arrived, the driver had already been taken to hospital, reportedly with injuries. Judging from his experience of such scenes, the operator said, the driver could not have been at fault. Tyre marks, blood, animal body parts and cow dung on the road, all clearly visible Wednesday morning, fitted the account that stray cattle caused the crash.

“The remains of the cows were in the road when we arrived,” the operator said. “A bit later a truck stopped, people jumped out with knives and cut up the animals and took them away.”

Police spokesperson Captain Mali Govender said the police had attended to the scene. “The patient was discharged. No serious injuries were reported,” Govender said. An accident report had been opened, she said.

Grocott’s Mail has not yet received replies to questions from officials (Sanral, the Provincial Traffic Department  and the municipality) on the incident.

There are often stray cattle on the N2 outside Grahamstown, particularly between the R67 (Port Alfred) and the R67 (Fort Beaufort).

*Updated Wednesday 14 September at 8am to include police comment and confirmed information about the driver’s condition.