Have you lost your cows? 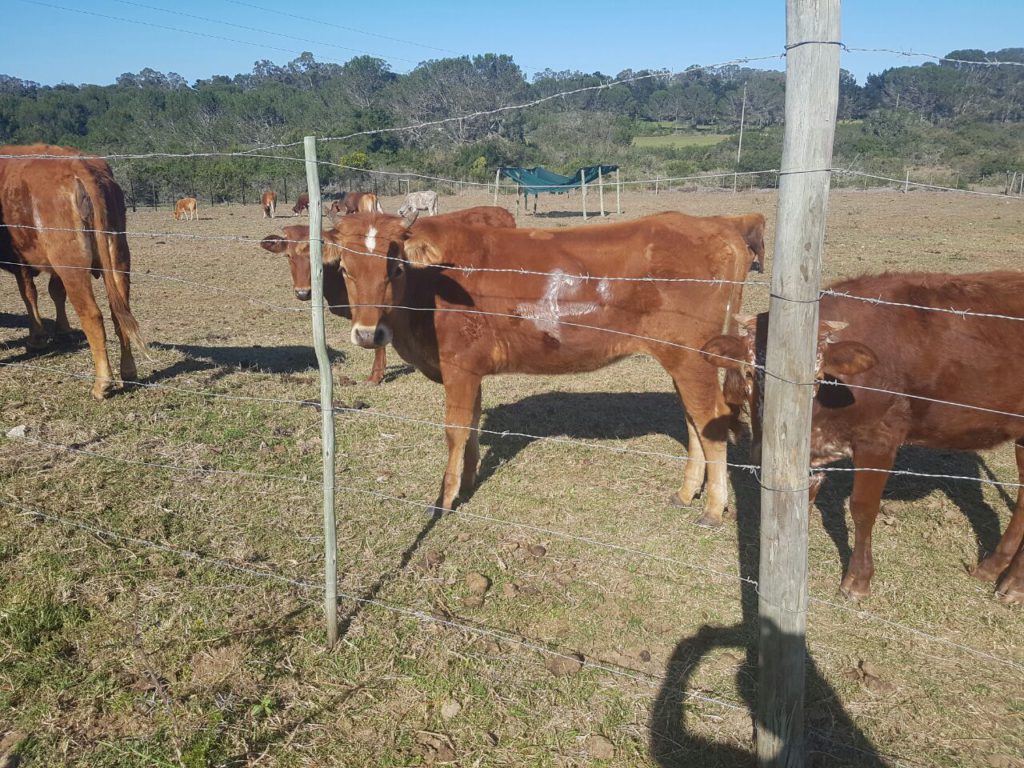 Cows removed from Grahamstown and taken to the Ndlambe pound. Photo supplied

GRA has been working and meeting with Makana officials and stakeholders since May this year to
achieve some resolution of the uncontrolled stray livestock issue. Progress has been gradual, but
with insistence from us and supporters a plan is now in place.

One repeated example of damage from unattended livestock is at the Rhodes University research facility situated
near the N2 not far from the Graduate Village. Cows have been breaking through the fencing to get
at greener grass, which also includes specimen plants in the nursery needed for a long-term research
project. Other plants are cultivated at the facility for landscaping projects. Their foraging for a tasty
blade has already cost many thousands of rands for Rhodes University, which will increase to
hundreds of thousands if they wreck the nursery and research project entirely.

Understandably, with seven years worth of research being trampled under hoof, the RU staff are not
amused and last month opened a case with SAPS. It seems that it is not just Makana municipality
who have to be coerced and pushed to take action. With no intervention in response to the SAPS
case, the cattle returned on Friday 1 September and Rhodes staff jumped into action to protect the
research facility.

On this occasion, only three of the 50-strong herd entered due to swift intervention.
These same cattle are the ones that have been herded across the N2 over into Featherstone Kloof
causing damage within the southern commonage. The cattle owner, who lives in Ndlambe, was
somehow alerted that firm action was about be taken to round up his cattle. He rushed to
Grahamstown, turning up suddenly with a number of dogs and quickly herded his cows to safety,
apparently on a nearby farm.

By this time the Stock Theft Unit had been mobilised and they assisted with seven cattle that
remained which were loaded onto transport and taken to Alexandria and impounded. The receipt
records seven cattle – three cows and four heifers. A week later these cattle haven’t been claimed
and neither the Stock Theft Unit nor SAPS have received any reports of stolen cattle in Grahamstown.
Have you lost your cows?

In the meantime, the owner of the larger herd has been identified and traced in Ndlambe. It
appears that he sees Makana as a soft option lacking enforcement against illegal grazing. Now that
he’s seen that citizens here are prepared to take action and ensure that authorities do their jobs, he
was seen on Friday morning (8 September) herding his cattle along Rautenbach Road. He stated
that he was putting them on transport to take them back to his home area in Ndlambe. This is good,
but is not the end of the problem, and more action will have to take place if the plant diversity of
this area is to be protected.

Among the actions Makana has taken is to re-draft its Commonage Policy which was presented for
adoption at Council on 4 May 2017. If you have an interest in the countryside around
Grahamstown you can see this draft document at www.grahamstownresidentsassociation.co.za
At most points of the compass the land outside Grahamstown is commonage, and the new policy
establishes a central Commonage committee, supported by Ward Commonage committees who will
be empowered to make recommendations. It is clear that there is growing demand for commonage
rights to grazing, which is already far in excess of the carrying capacity of available land. Makana’s
policy states that existing lands under their control will be reviewed to help address the shortfall,
and new land acquired where possible.

If you want to keep up, follow us on Facebook or – better still – sign up as a member. Strength in numbers helps us when we work with municipality and provincial government. If you use WhatsApp, you may also have the option to join up with a local neighbourhood group (for example, in Sunnyside). Previous ArticleEthembeni closes as funds dry up
Next Article In America, all politics are local